This walk was actually completed in 2011, when it was one of a series of walks in an AA guide book. The walk actually starts slightly away from the Canal in Limehouse, but here I have extracted just the canal part of the route. I did not have my GPS unit switched on for the walk, so the plot in GoogleMaps was a pre-prepared route rather than the actual recording.

The can starts off as it enters the Limehouse basin, as can be seen in another canal walk (starting at Bow and going in a loop around Regent’s Canal and the Hertford Union Canal). Anyway, we join the canal by Salmon Lane lock, on a moderately bright Sunday afternoon. 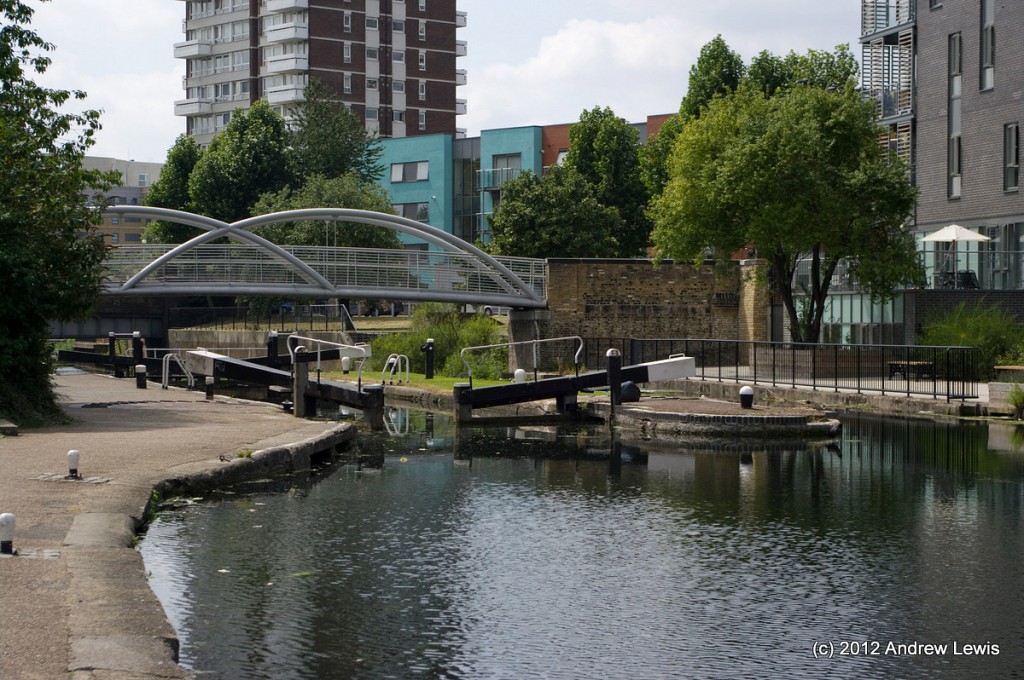 The canal heads generally to the north east until it reaches this rail bridge, where it swings through about 60 degrees to the north west. 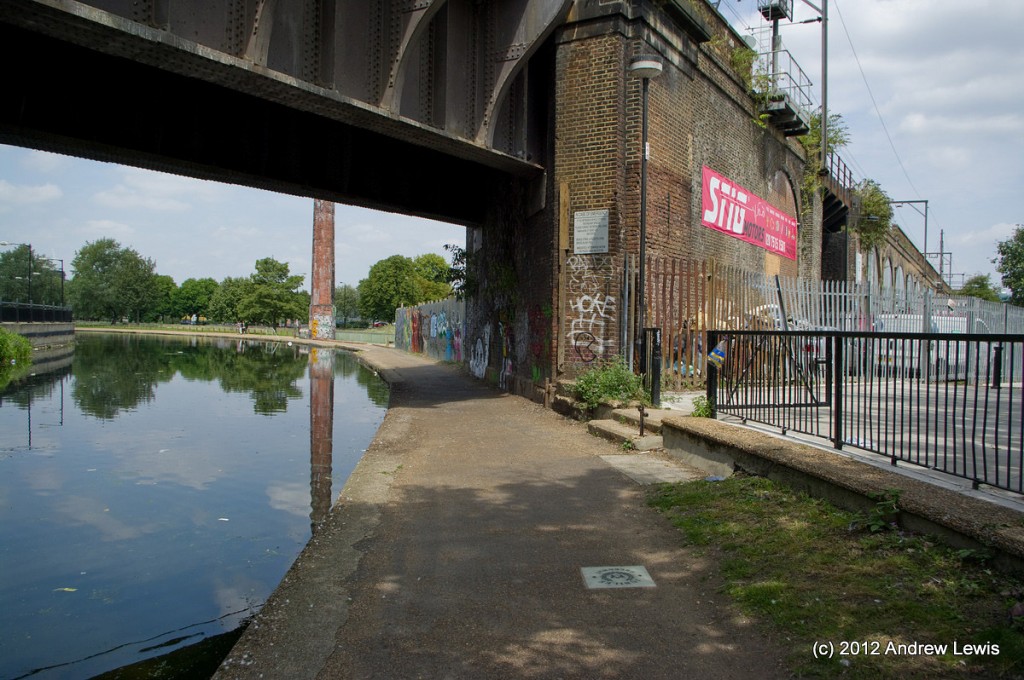 To the eastern side of the canal are several green open spaces and the feeling is one of light and quiet. 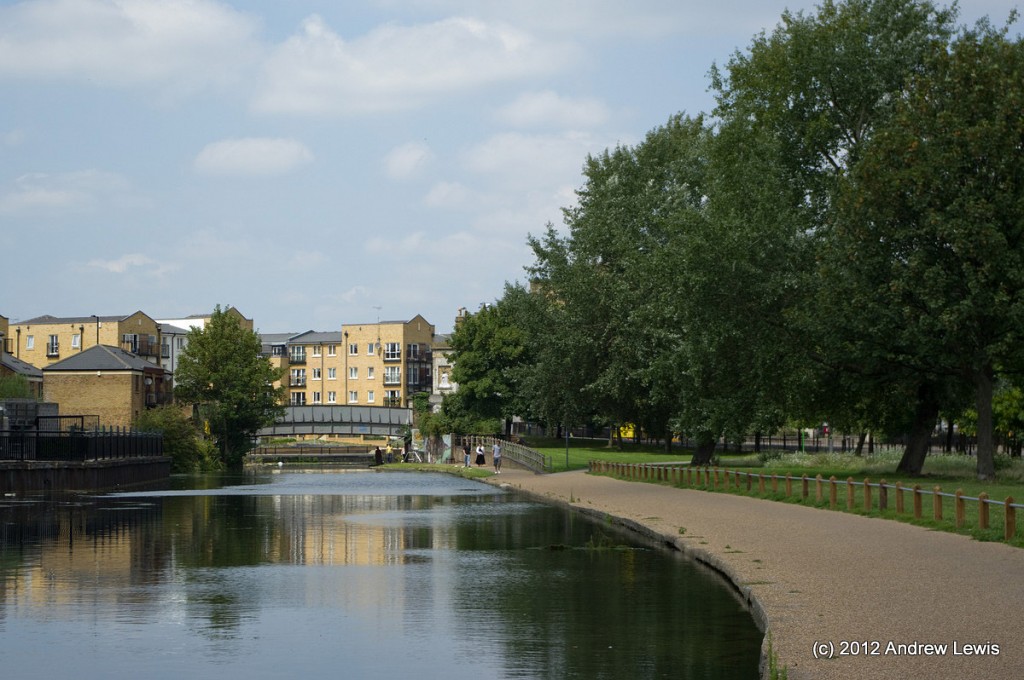 Locks on this section are relatively evenly spaced. 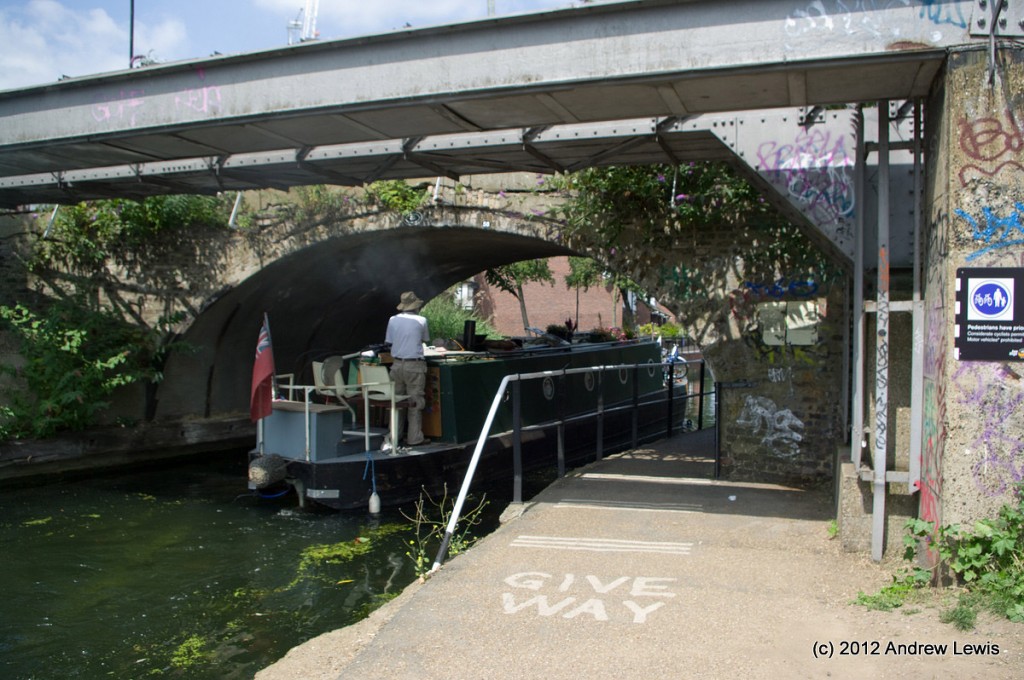 The bridges and locks are generally surrounded on the west by buildings but on the east, by a wall and overhanging trees. 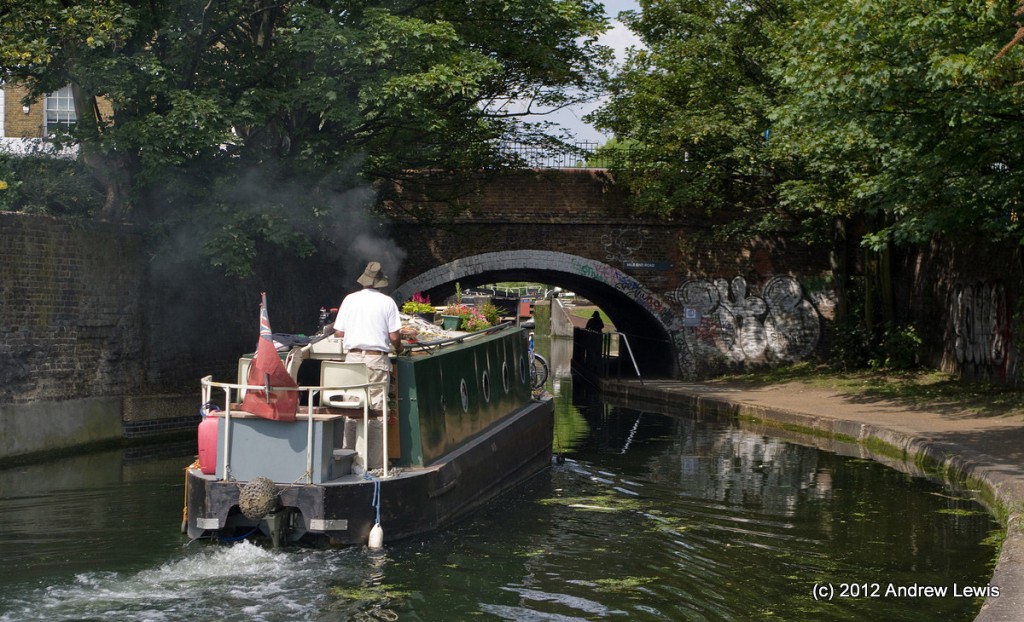 Things become a bit busier as one approaches Mile End Lock, and new larger builings open out the vista to the east. 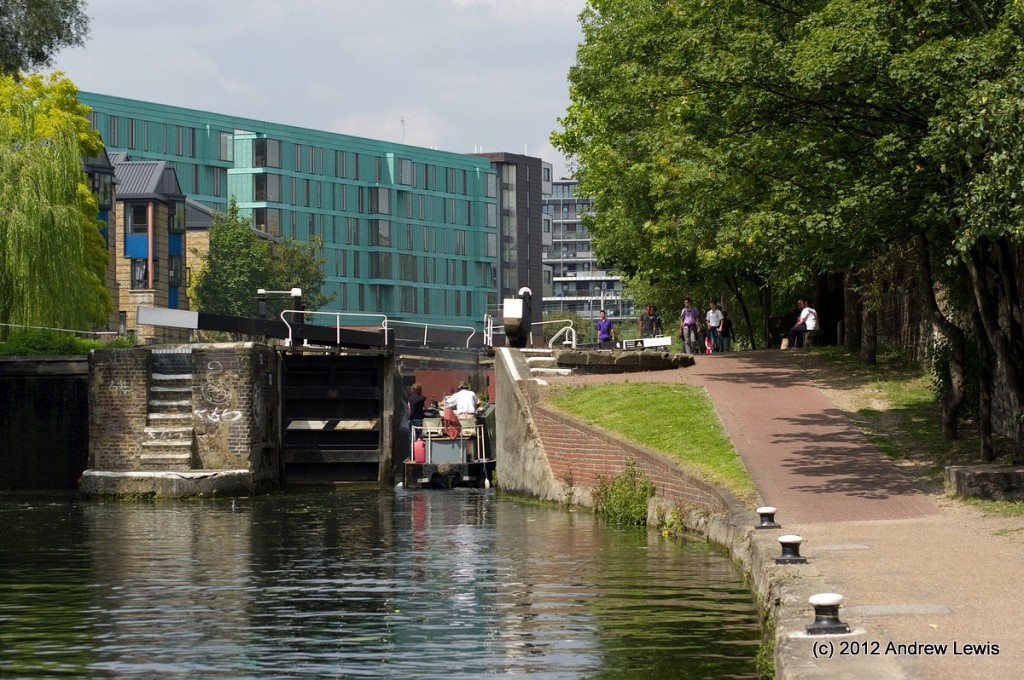 The contrast, looking back, is quite striking, between the old brick and then the new metal of the latest buildings. 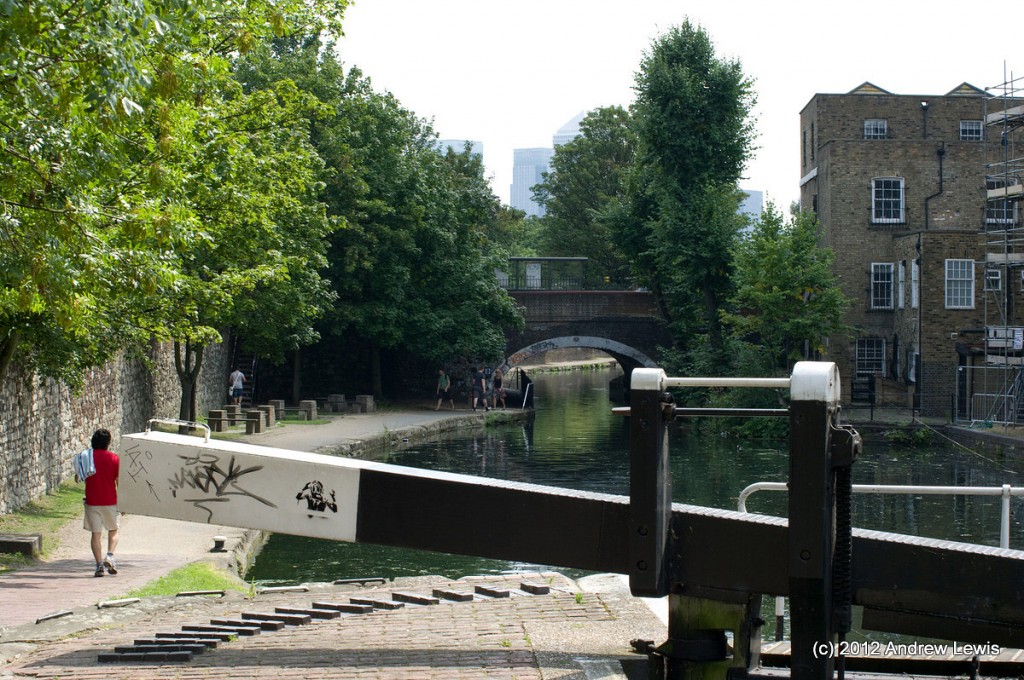 It looks like there has been some repairs made to the top gate of Mile End Lock. 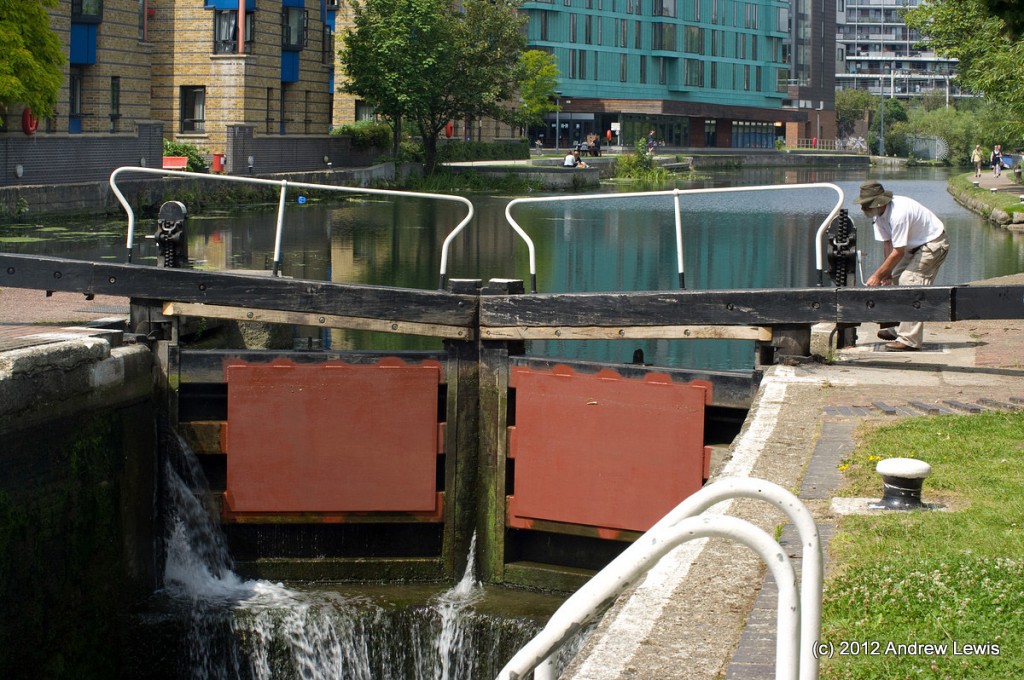 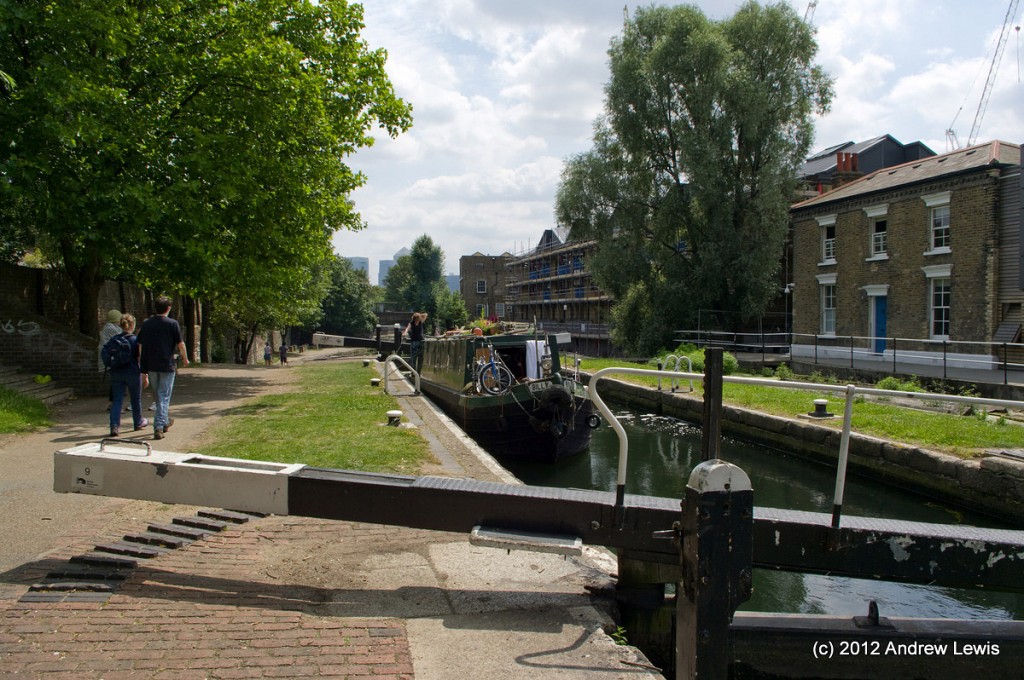 Looking back into Mile End Lock 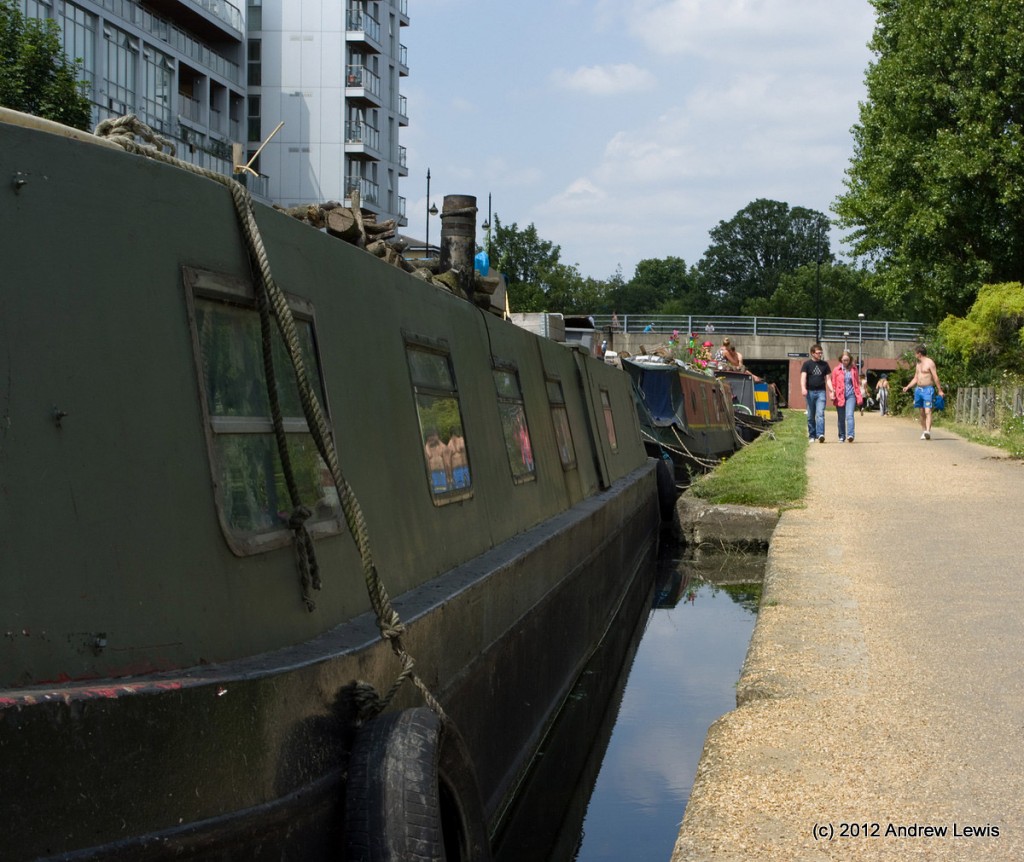 There is a short stretch of mooring south of Roman Road bridge. 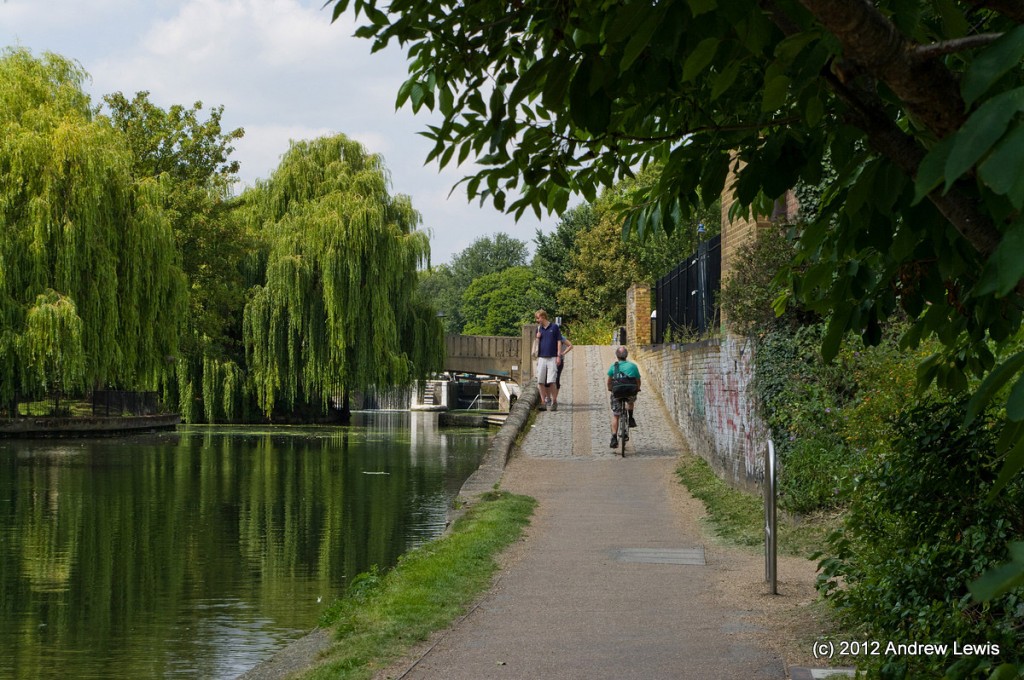 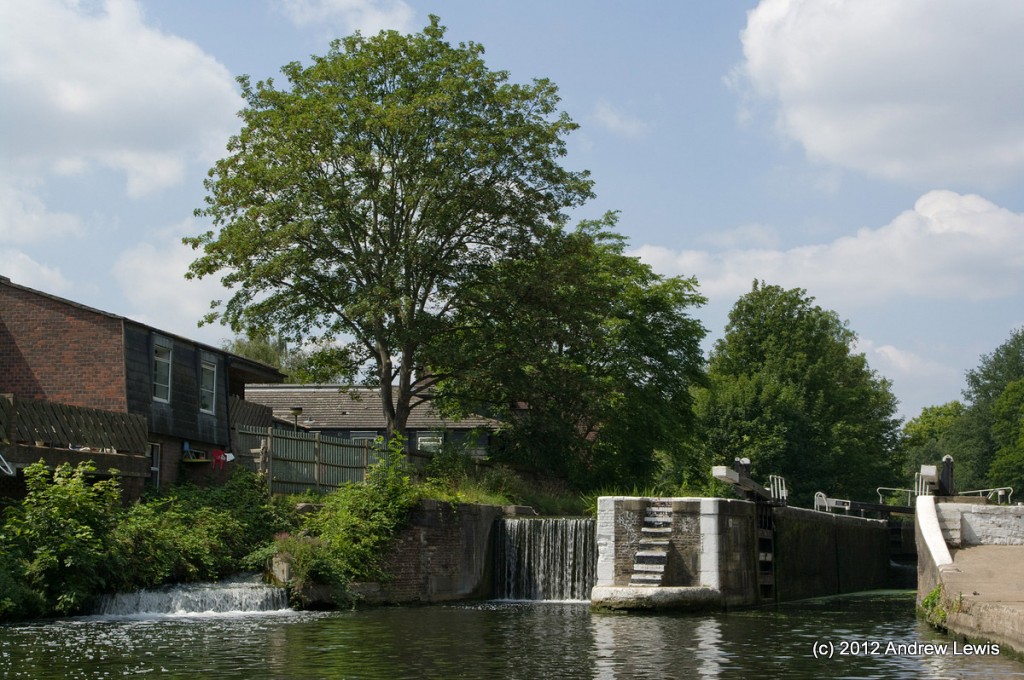 Old Ford Lock is also quite picturesque, reminding the walker that the canal is rising up at this point heading towards north London. 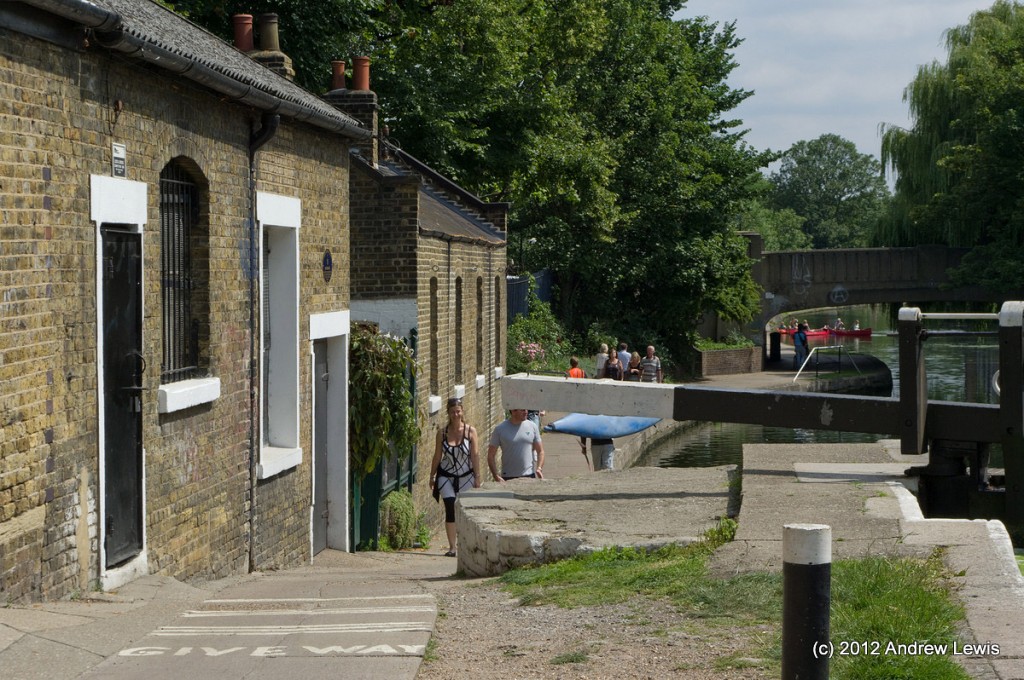 After Old Ford Lock, a run of moorings takes advantage of the shade from nearby trees. To the right is Victoria Park, along which, on the southern boundayr, runs the Hertford Union Canal. 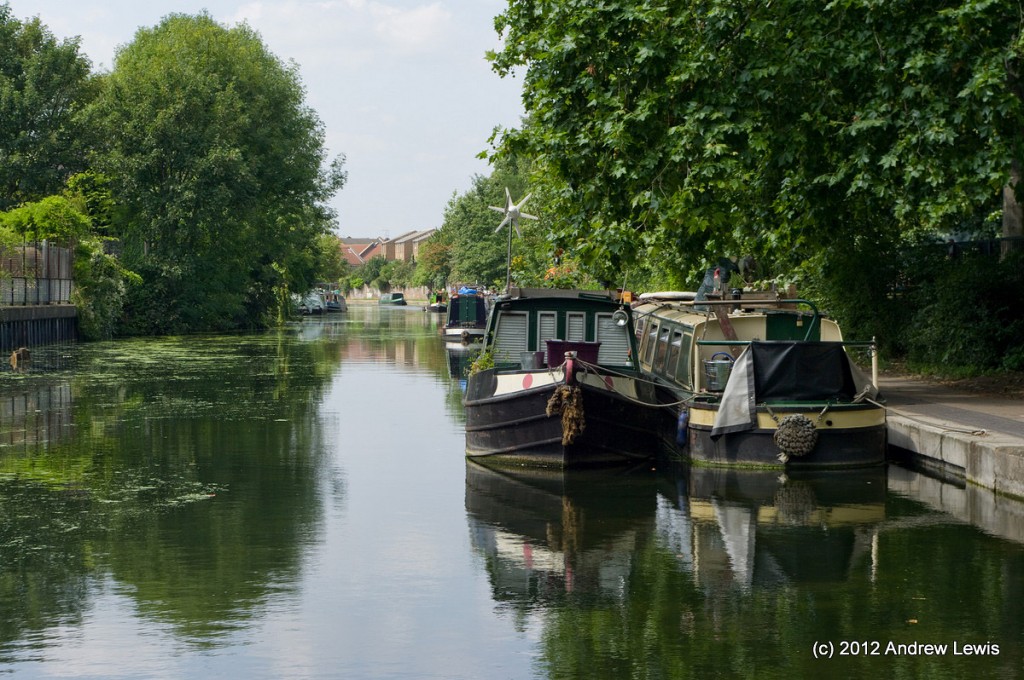 The scenery changes slightly now to a mixture of urban industrial and housing, generally with the housing on the north side. 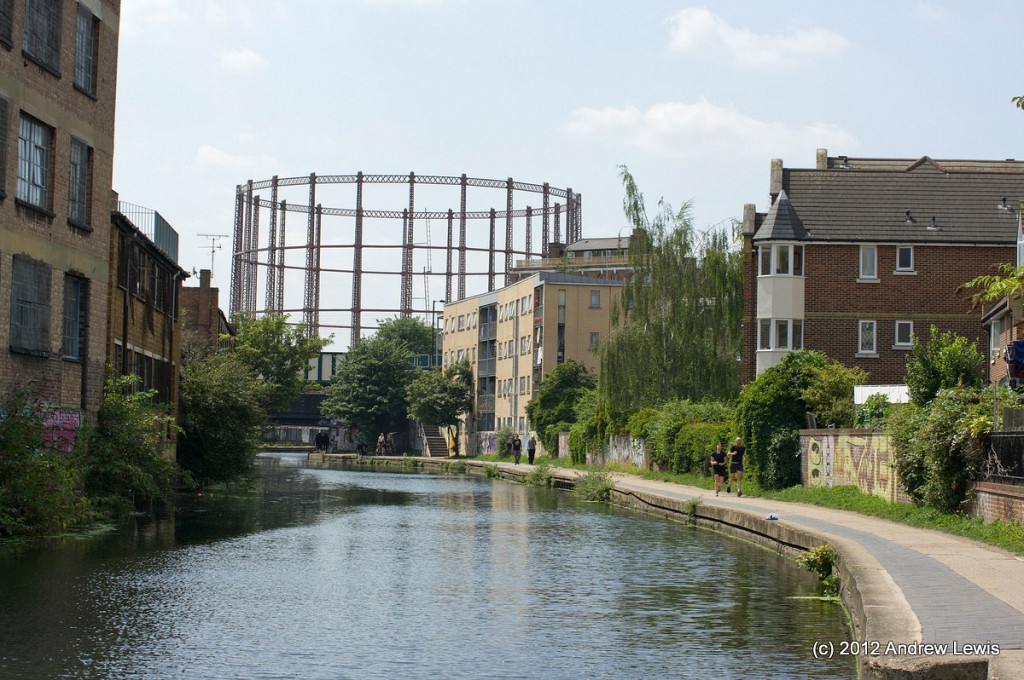 Back gardens give way to walkways with iron railings as the canal undergoes a slight curve, before becoming relatively straight for the next mile and a half. 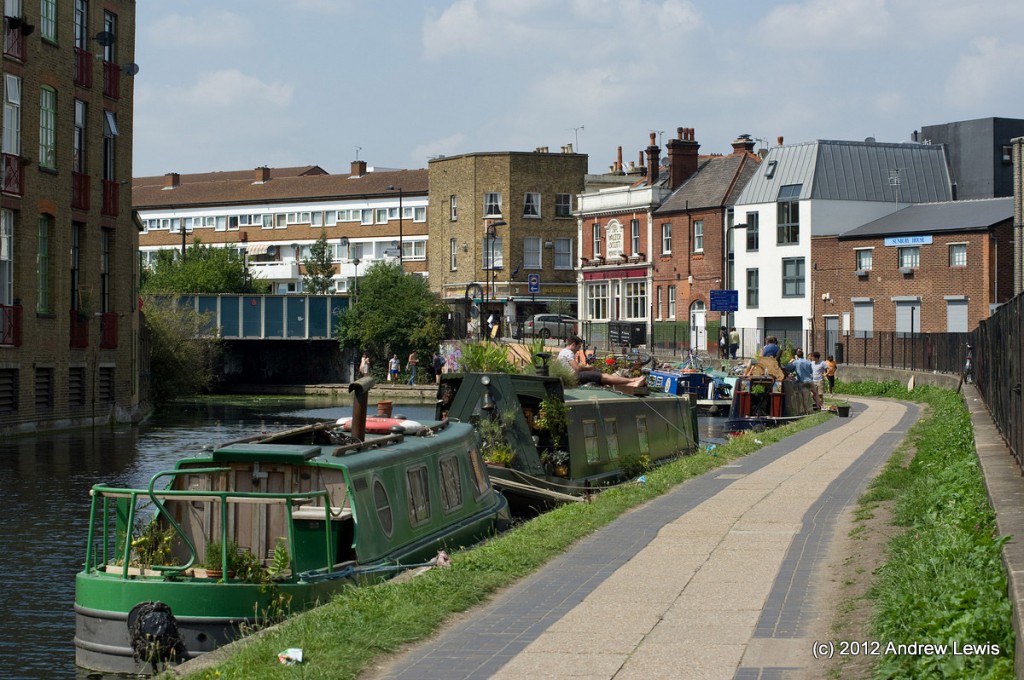 There are three remaining locks before the canal reaches the Islington tunnel and Actons lock is the first of these.

The towpath here was quite busy and there were lots of people milling around, having lunch and generally relaxing by the water. 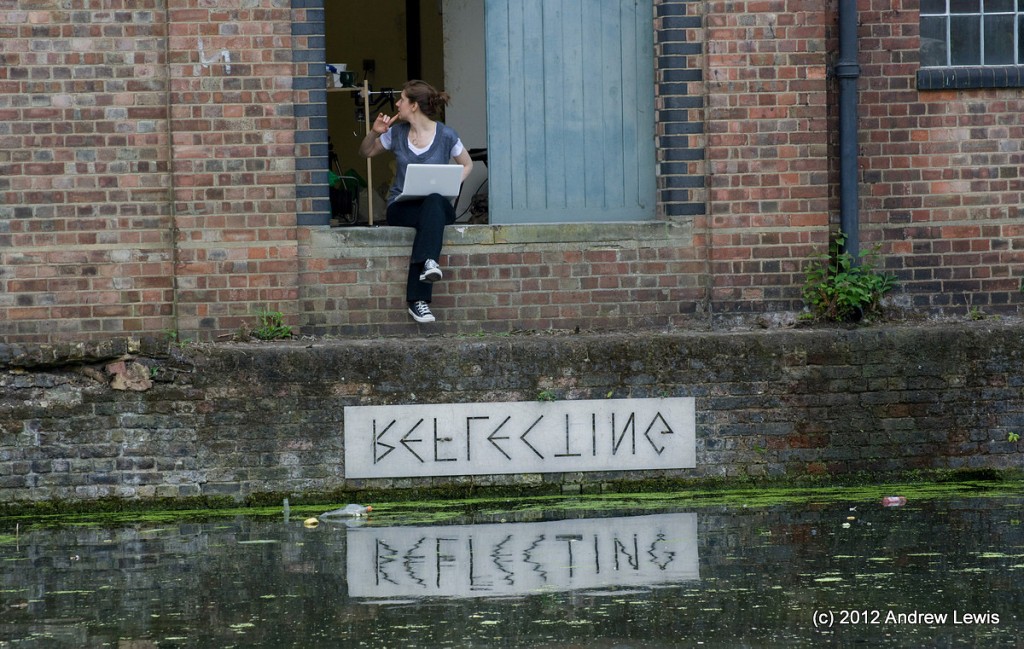 A moment to reflect

Several road bridges criss-cross the canal and a local resident made use of his yellow plastic kayak. 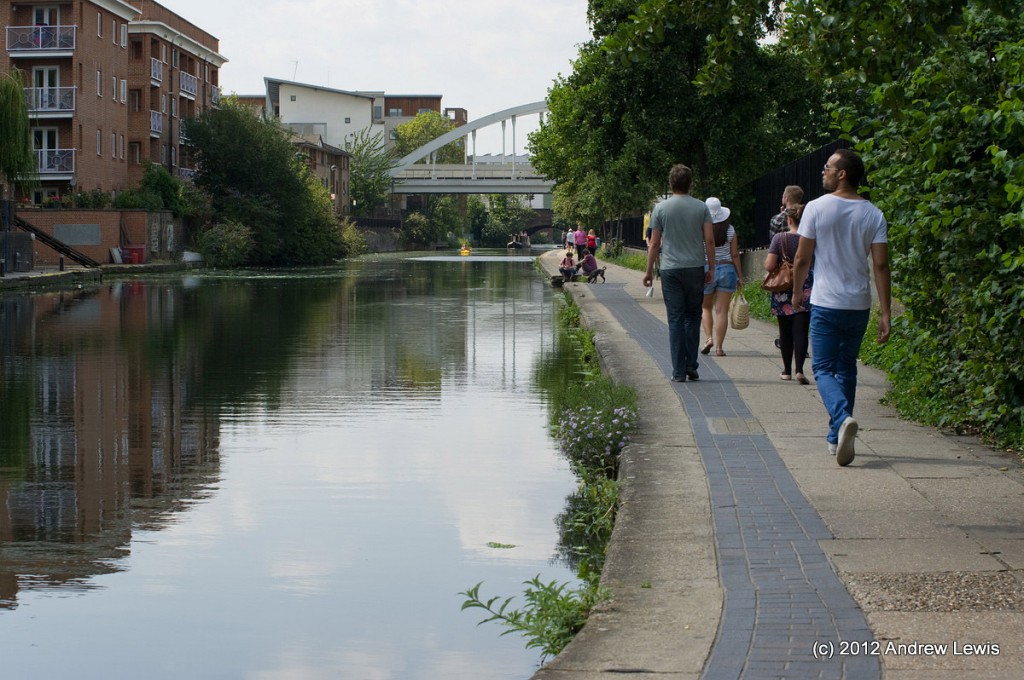 There are a few small inlets along this stretch, making quite secluded moorings. 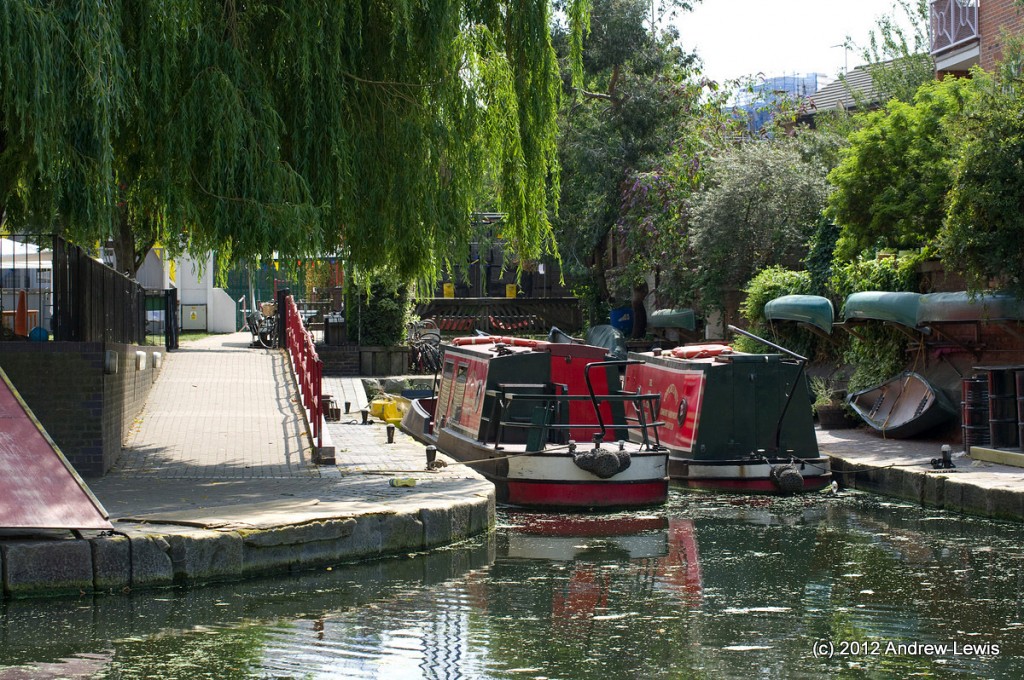 A rise in the path signals a bridge over the entrance to the Kinsland Basin . 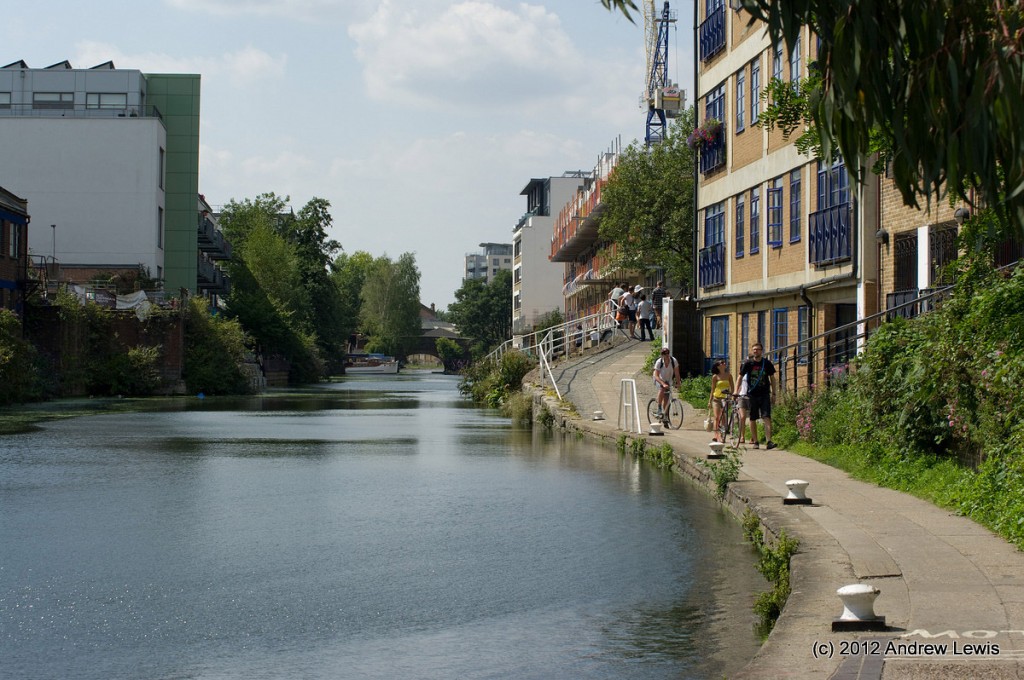 The canal here is quite wide and relatively straight. 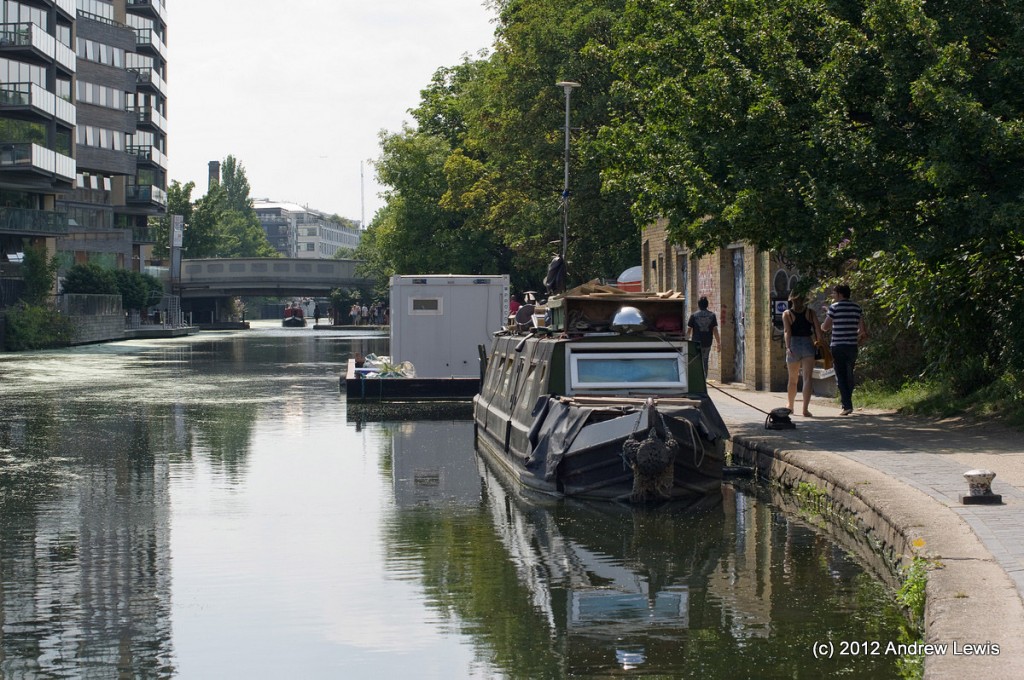 In the late summer sun, the algae was thick in the water wherever it stagnated – it was clear that Sturt’s Lock had not been opened recently. 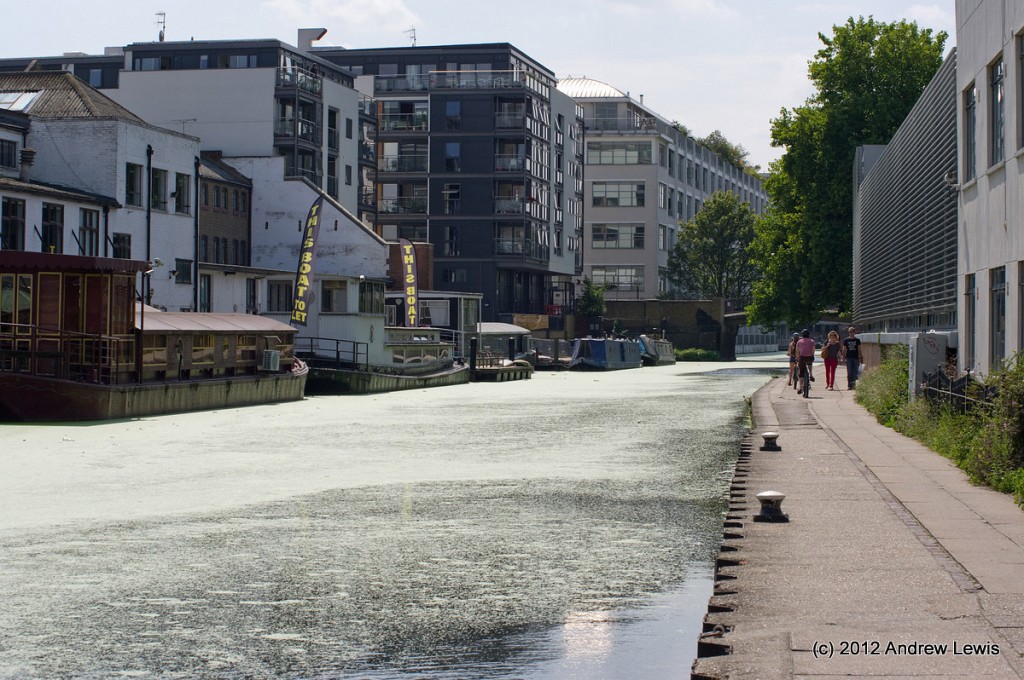 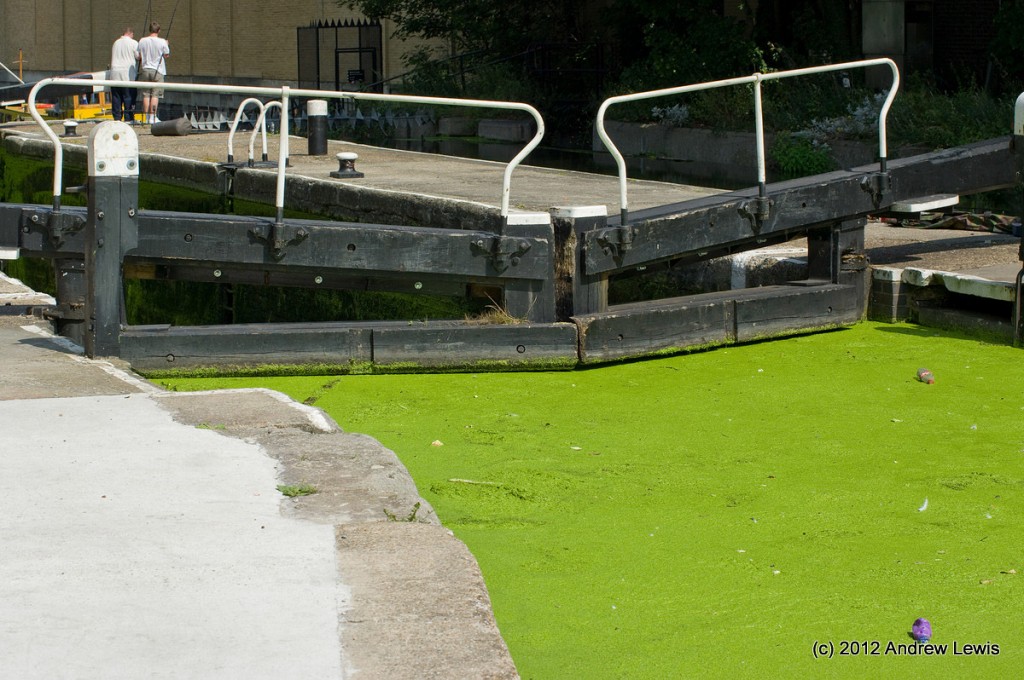 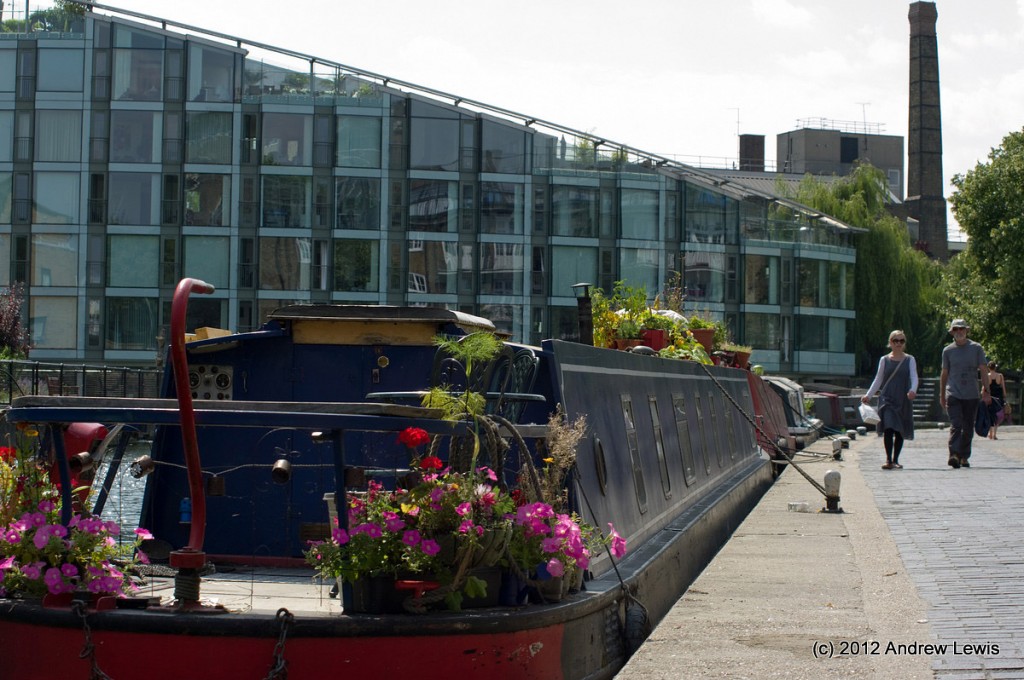 The towpath widens here, opposite Wenlock and City Road Basins, and the view to the south gives sight of tall buildings of the City. 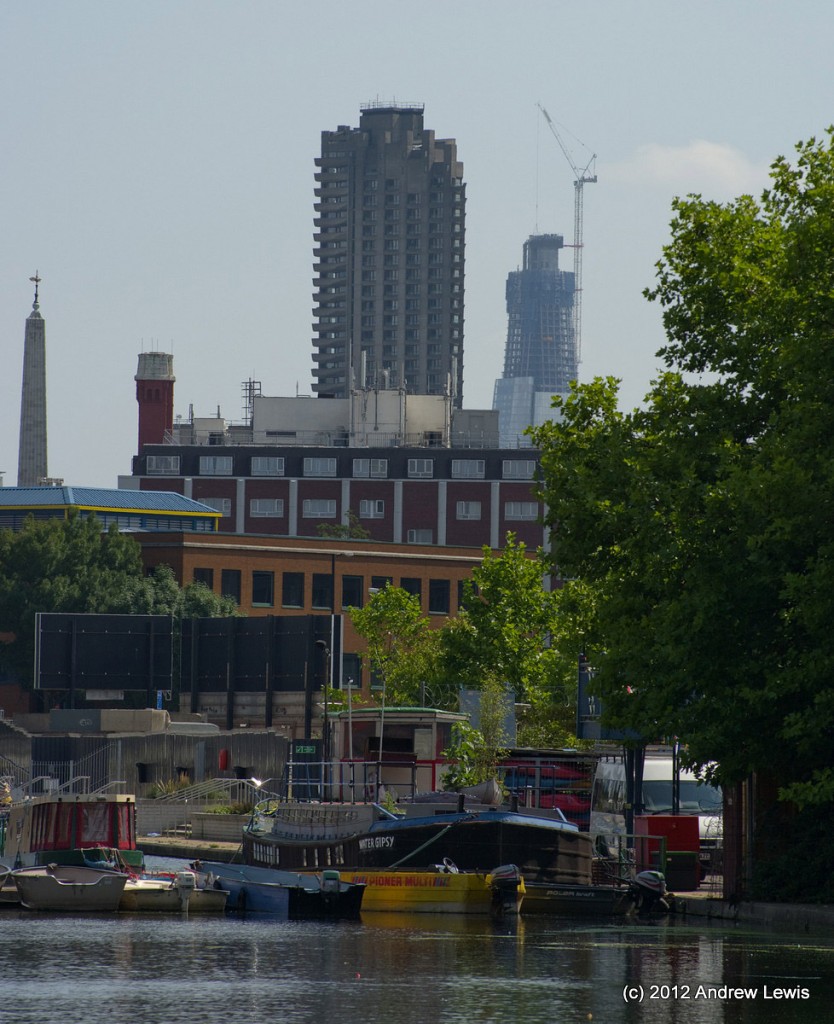 The Shard rises in the distance over the basin

City Road Lock was also holding back a tide of algae, which added to the greenness of this area, with the overhanging willow trees. 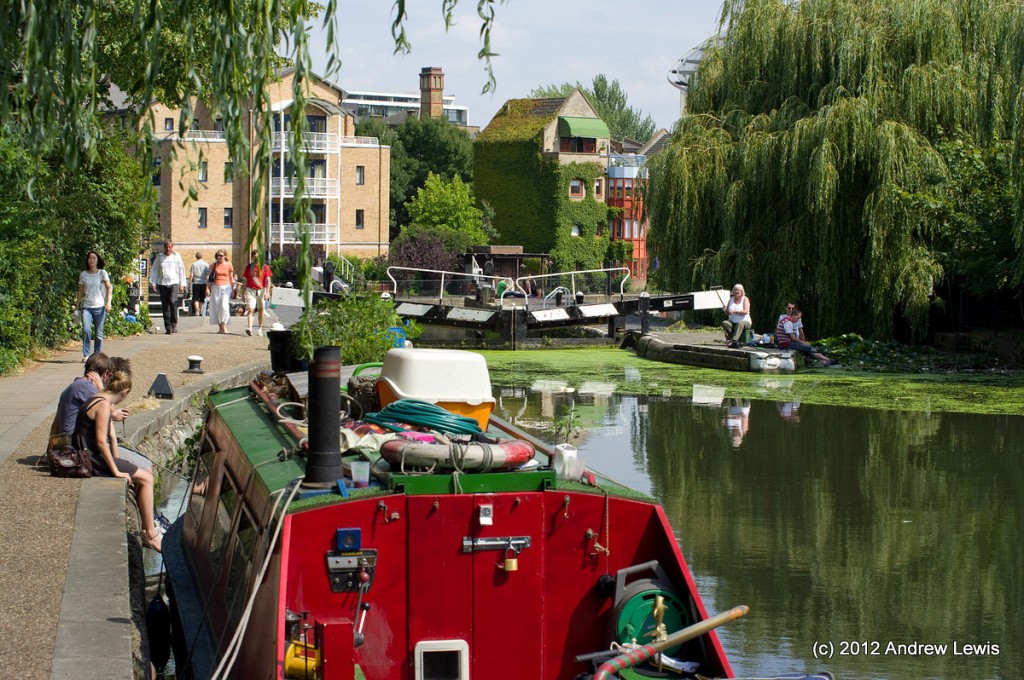 Shortly after passing the City Road Locl, Froglane bridge comes into view and then, behind it, one can see the entrance to the Islington tunnel. 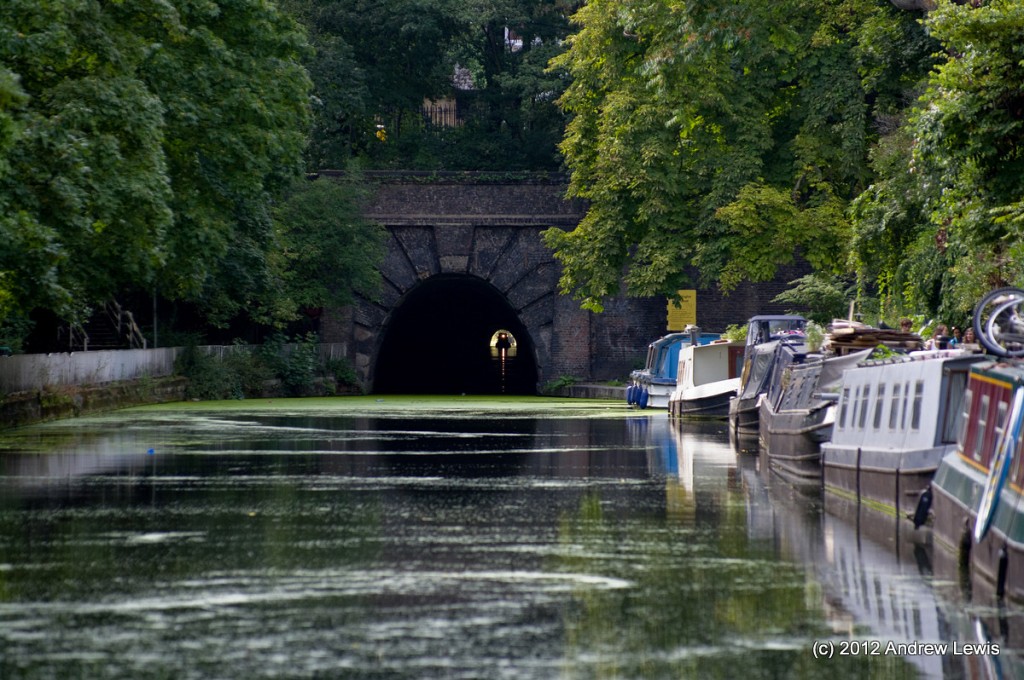 The towpath ceases at the entrance to the tunnel and a few brave souls held onto the bricks at the side of the entrance whilst swinging out for a better luck. I decided not to risk my camera, just in case. 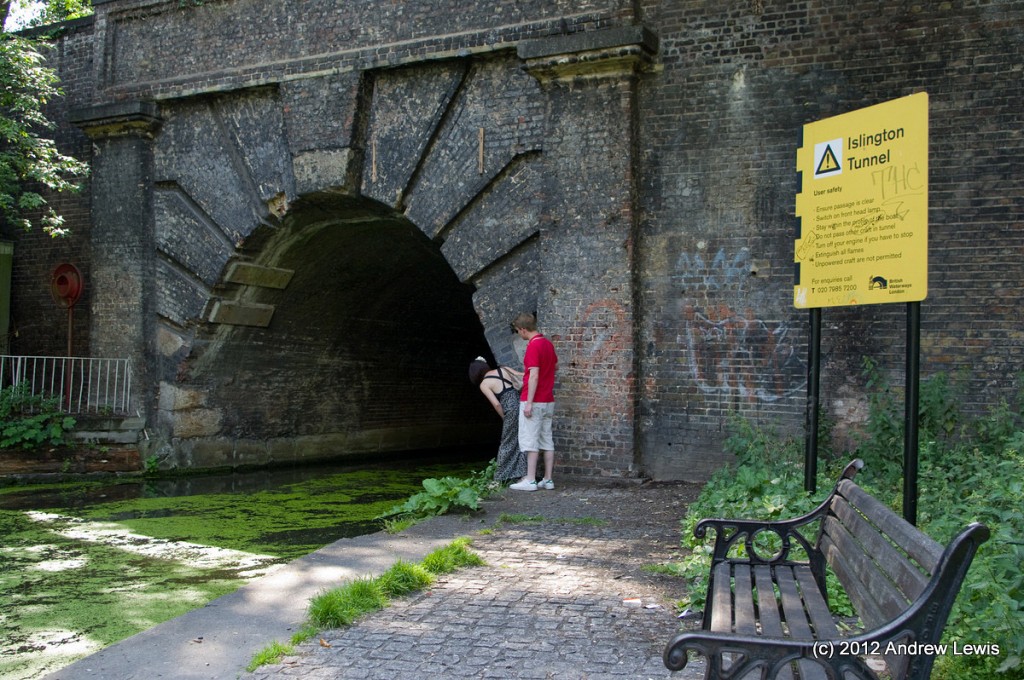 Peering into the tunnel – no footpath!

When I looked into the tunnel I could see a light advancing and hear a boat’s engine. A few minutes later, a boat emerged, having traveled the 960 yards from the western entrance. 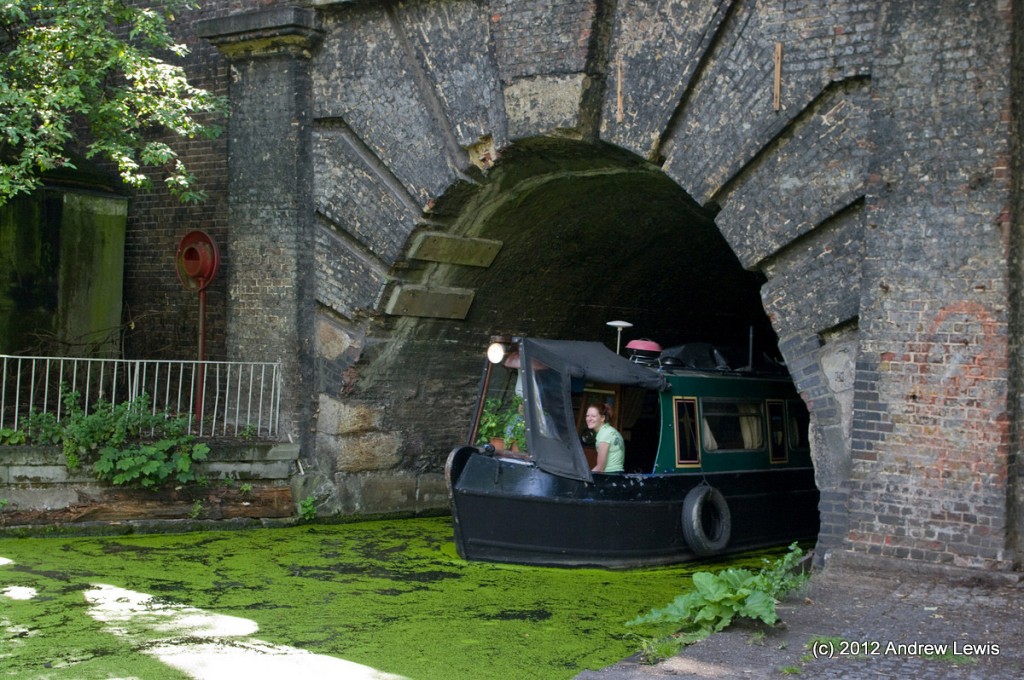 Emerging from the east end of the tunnel

Well, that was as far as I could go, so I used the path by the side to climb up to the level of the roadway and made my way to the nearby Angel tube station, then back home. 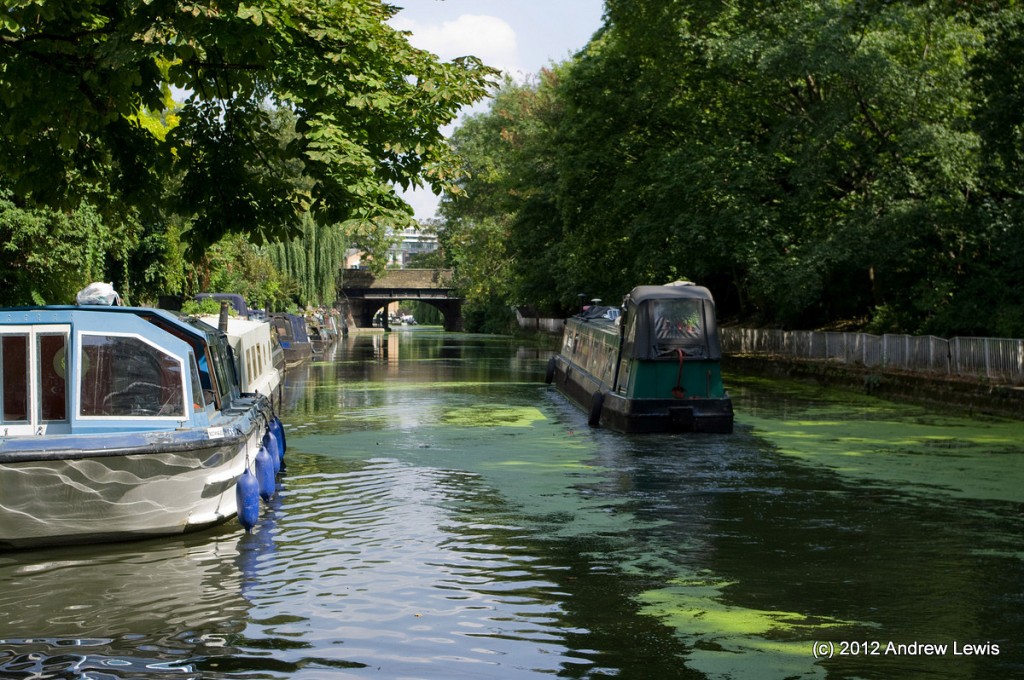 Looking back eastwards from the Islington tunnel

On the other side of the tunnel, the canal stretches as far as Paddington, but that was too long a walk to complete straight after this one, so it was left for another day.

I did not log this walk with the GPS, but Google Maps informs me that it is 4.7 miles long.

View Regent’s Canal : Limehouse to Islington in a larger map