Maybe it was the weather (the forecast was for rain, but there was blue sky in the morning, which was later replaced by rain, then grey overcast until dusk), or perhaps the review I had read about this particular branch of the Grand Union Canal, but this was the least attractive part of the canal I had walked to date. Also, the canal runs in almost a straight line from start (Slough) to finish (Cowley Peachey Junction), so the only real changes along the route are the surrounding semi-urban countryside, the various bridges and aqueducts and a large mooring half way along. Still, it was only five miles and it was there to be walked, one day or another.

The branch starts at an abrupt terminus by the side of a builders merchants in Slough. 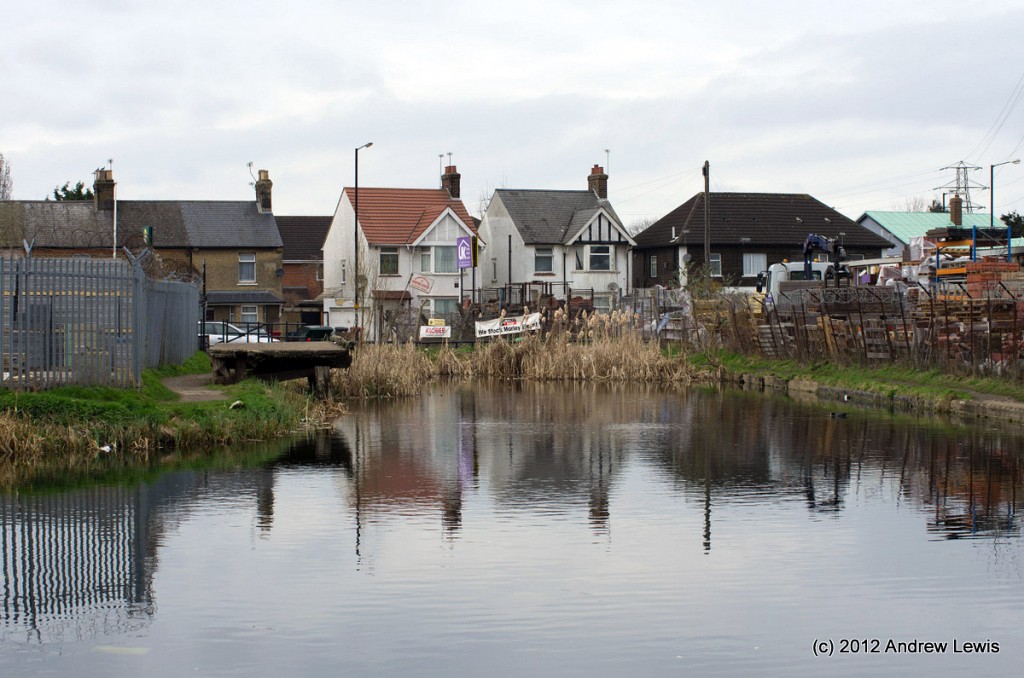 Start of the Slough branch, abrupt end at Slough

There were various signs showing that the volunteers who maintain this stretch were going to have their annual cleaning up on 31 March, so it was pleasing to see that the canal is still some way from falling into disrepair, even if the silting up of the stretch nearest Slough means that few boats can travel this far. 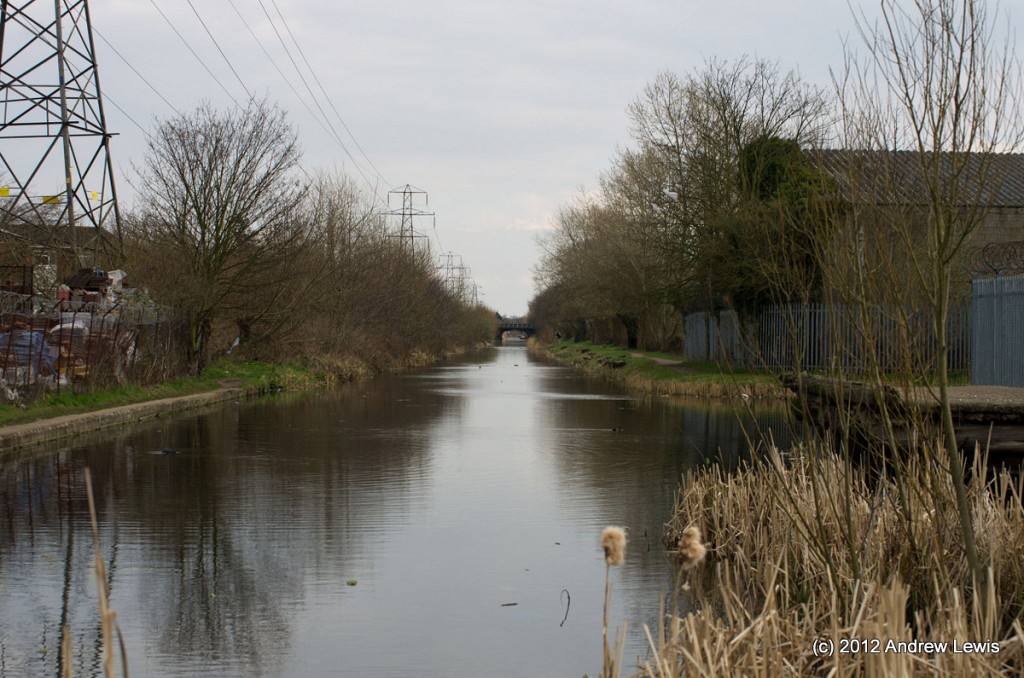 At least the abrupt end of the canal is an area where a large reed bed is growing and a swan seemed perfectly at home in the reeds. 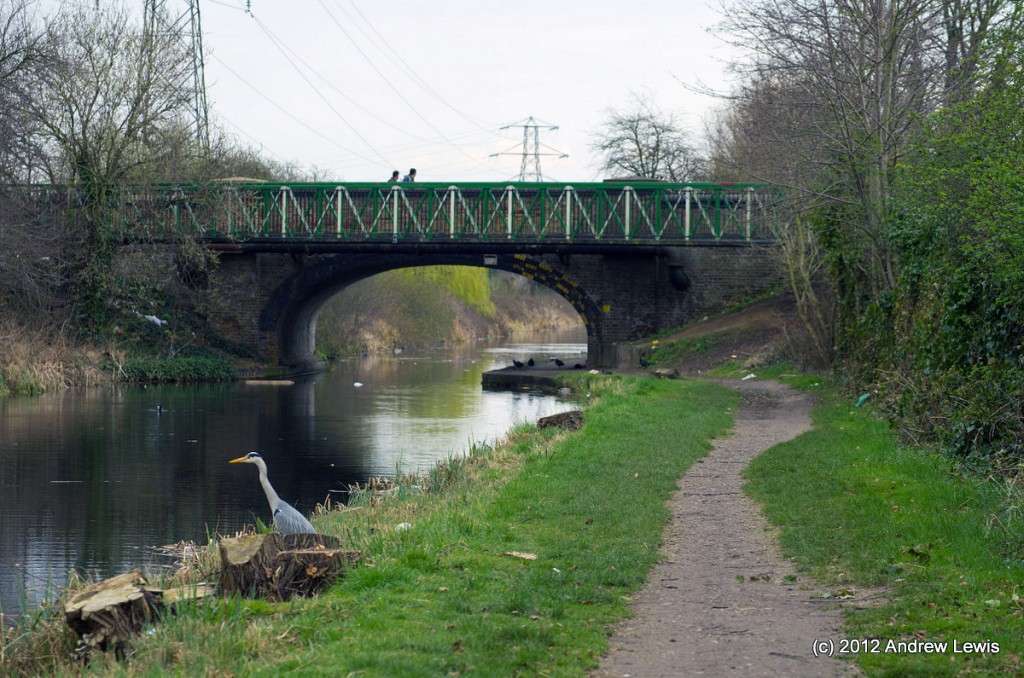 Further along, a heron was plying the water, skimming from bank to bank, looking for fish, as the first bridge came nearer with every step. The bridges are the main features which segregate different sections of this branch, the almost arrow straight nature providing very long views into the distance, punctuated by the bridges. Elsewhere one or two roving fishermen were walking along the towpath, casting lines into the still water, probably looking for the large pike that was apparently spawning in the canal a week before (as one passer-by informed me). 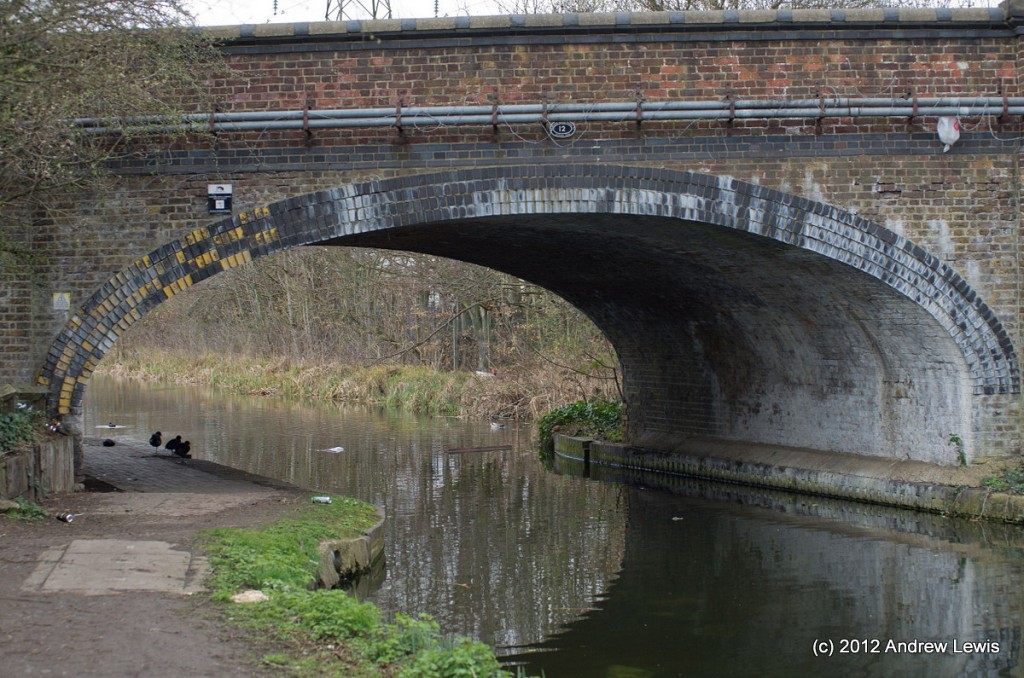 A variety of bridge styles were evident, with the majority being brick built, all being fairly low, often with foot paths rising up to each end. 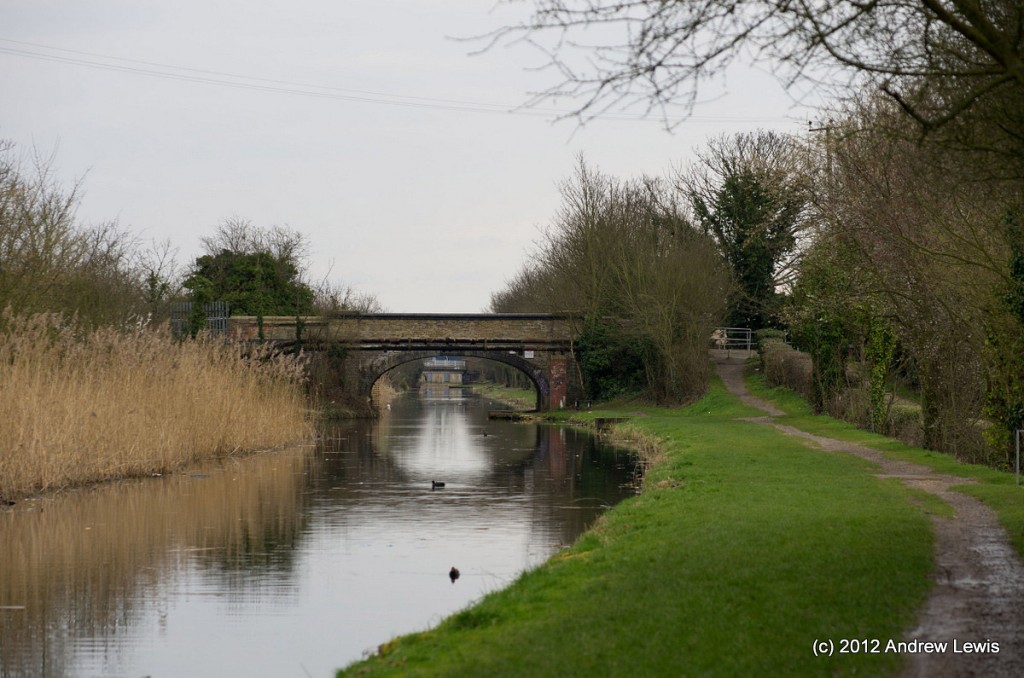 After about a mile and a half, the can bends subtly to the north, and the houses which occupied the land north of the northern bank give way to greener fields, hedges and reeds. 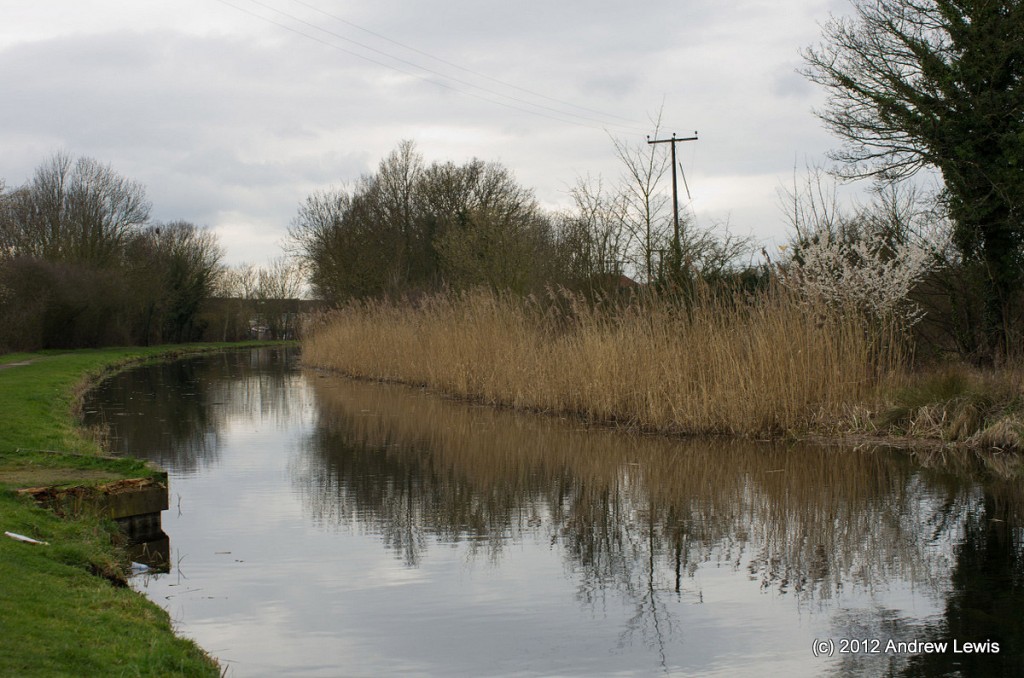 The southern (right) bank is the side where the towpath runs for the entire five mile stretch and now, for a fair distance, after bordering on the edge of fields and parkland, the towpath runs along the backs of factories and warehouses. Several large modern buildings with high-tech cameras and security adorn the land to the south, followed by more buildings right up to the towpath edge. 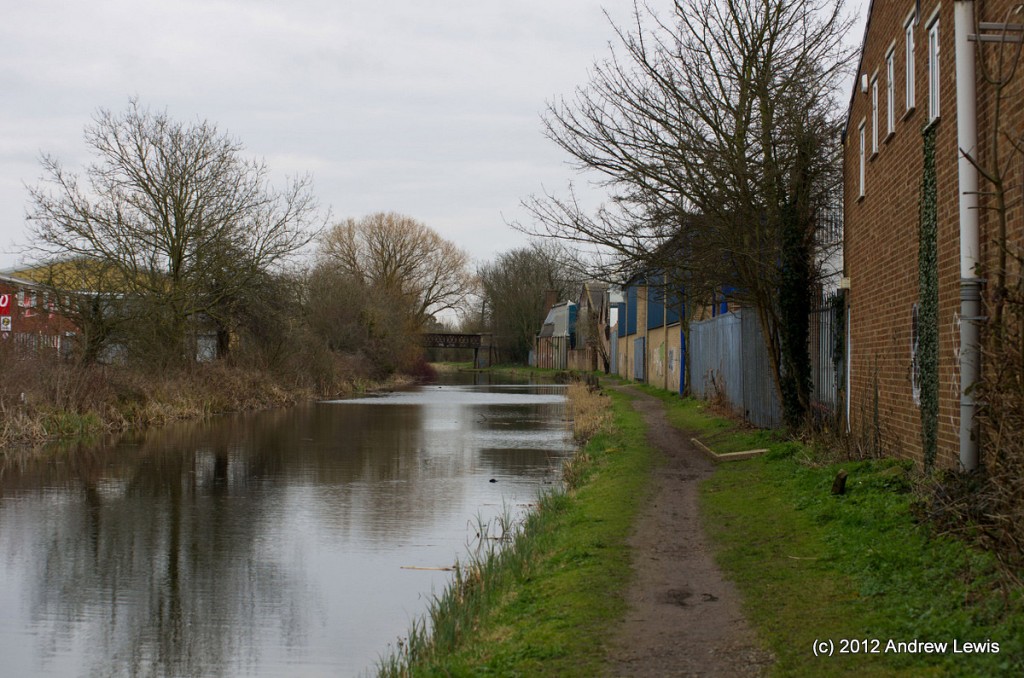 The banks here are mostly perfunctory, but with the occasional dash of colour afforded by spring flowers. On a brighter day, this would have been a pleasant spot to stop for a rest. 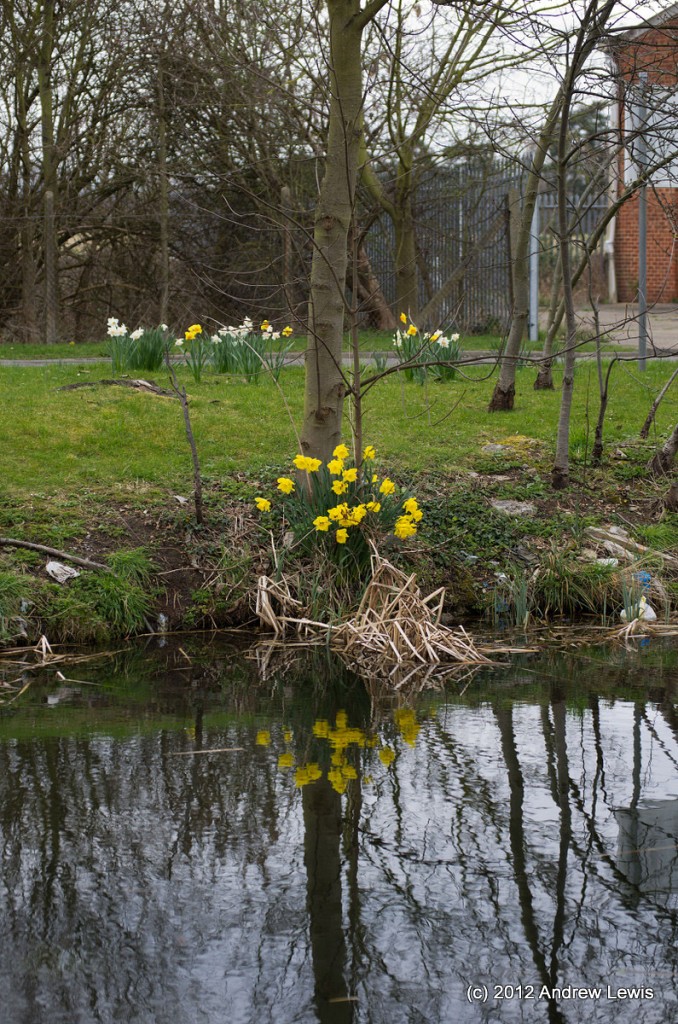 Spring flowers opposite a factory near Langley Part Road Bridge

One of the highlights of the walk came into view around the next gentle curve, after passing under the Langley Park Road Bridge – a long mooring of boats on the northern side of the canal stretching right up to the next bridge and the small marina and boatyard just before it. 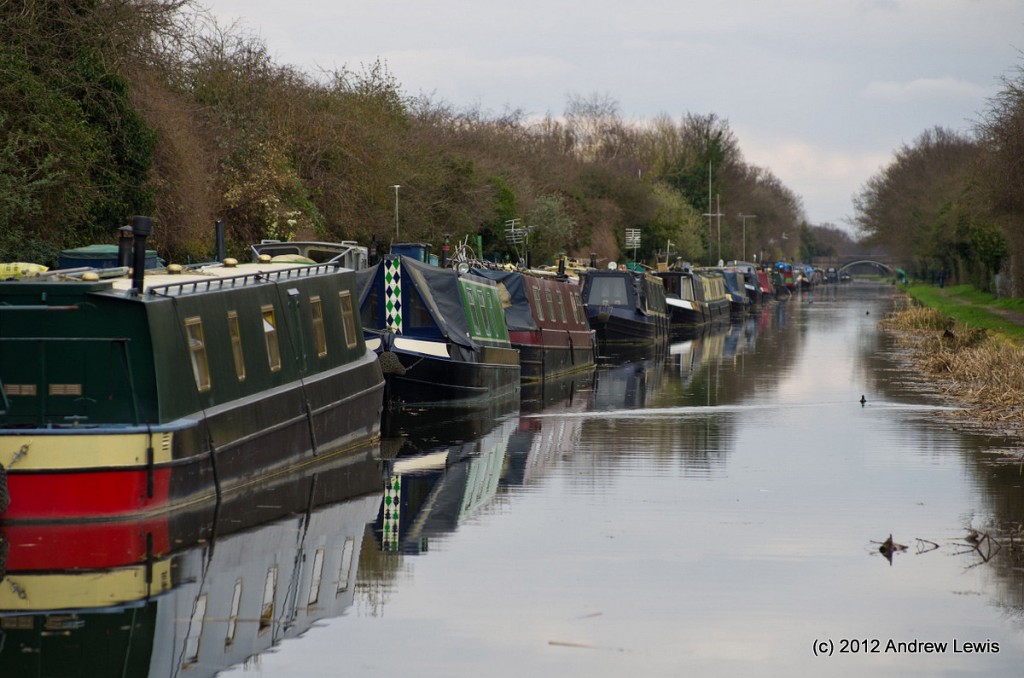 Moorings to the north of Langley, between Langley Park Road Bridge and Hollow Hill Bridge

There was a lovely smell of coal and wood smoke in the air, from the few boats that had people inside on this changeable day. One of the boats looked like it was home to a radio enthusiast as there was what appeared to be a long wave aerial slung between poles on the embankment as well as a collection of other aerials. 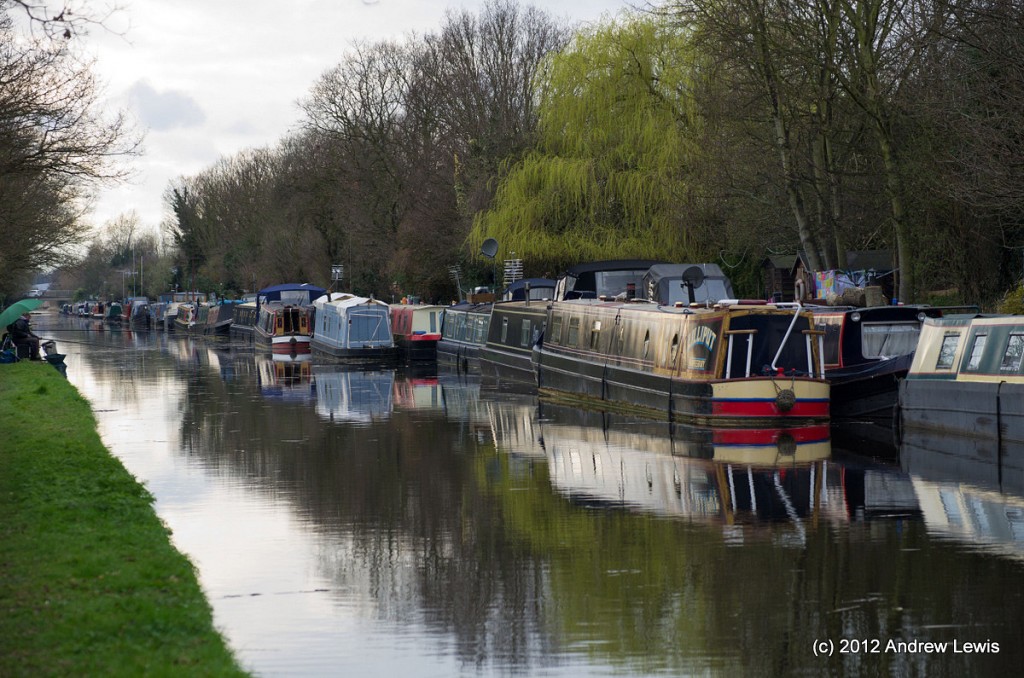 Looking westwards at the moorings near Hollow Hill Bridge

Just before the next bridge at Hollow Hill is a small boatyard, where a couple of boats had been lifted out the water and were undergoing maintenance on dry land. 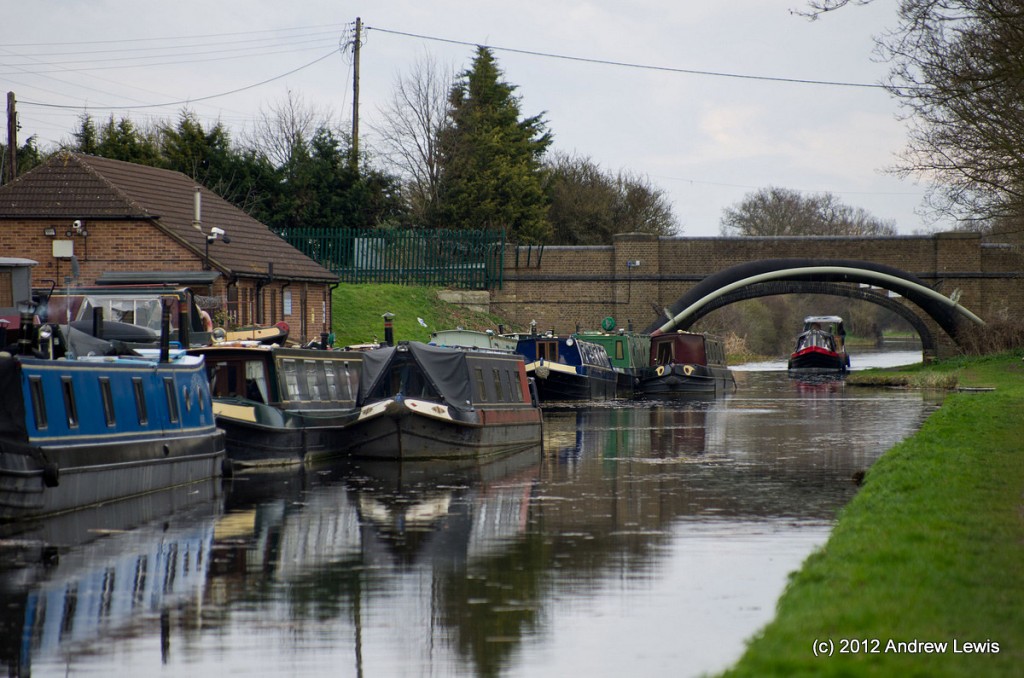 Hollow Hill Bridge and the marina/moorings

With the boat out of water, it is much easier to see just how flat-bottomed these boats are, and hence why they are able to travel in relatively shallow water. 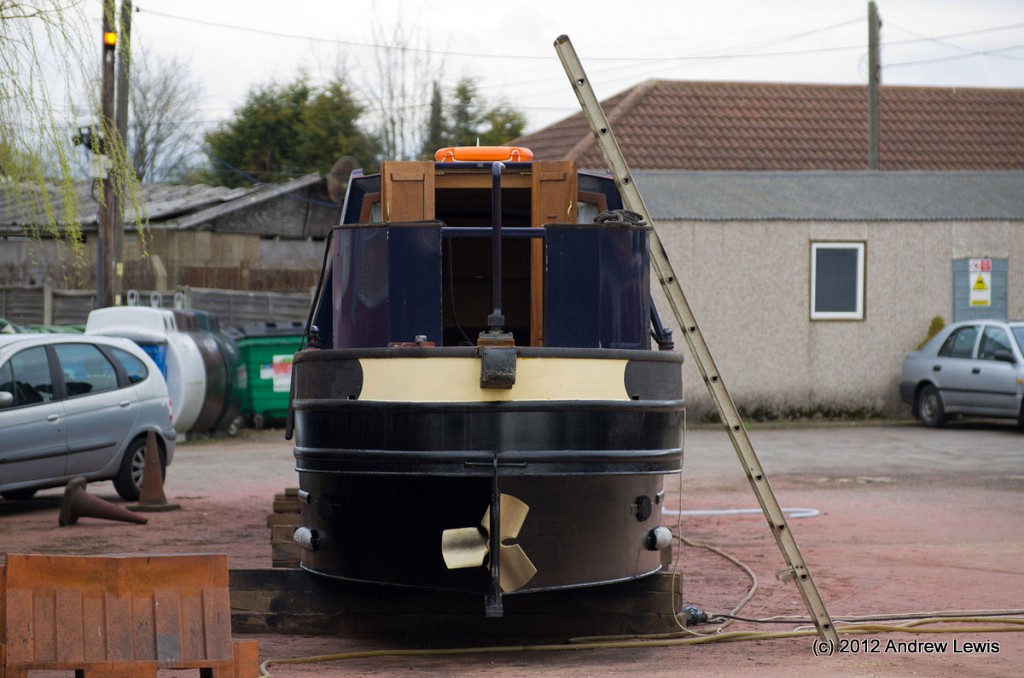 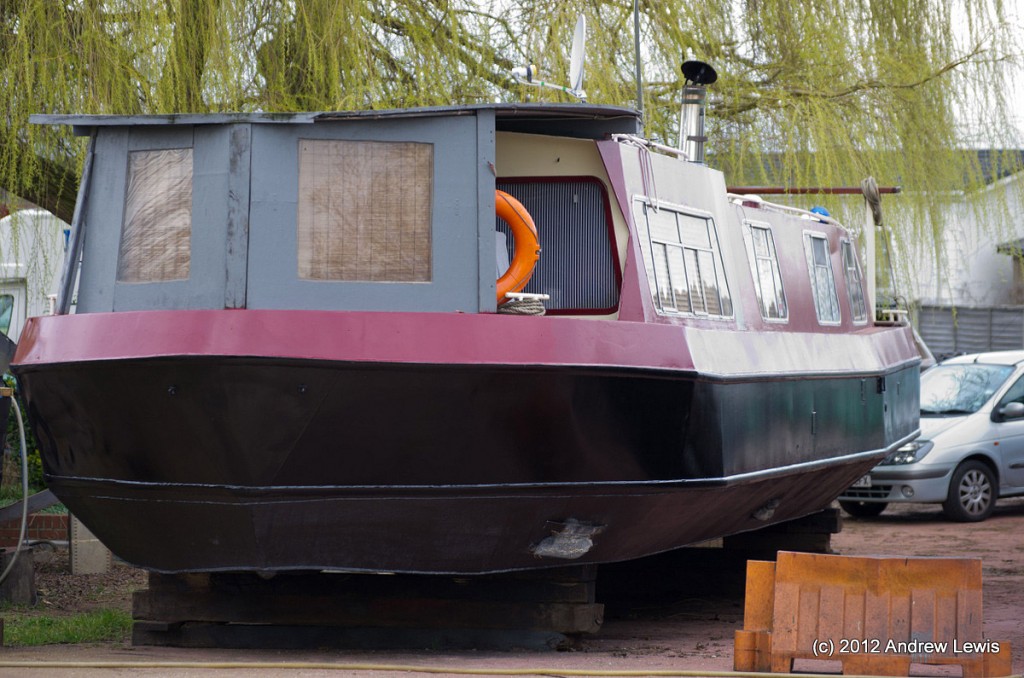 Further along is what appears to be bridge number 5, or rather the remains of it. The map I had been following showed bridges 4 and 6 but no bridge 5, so my assumption was that this bridge had become disused or damaged and had been removed, leaving only the remains of the archway at either side. 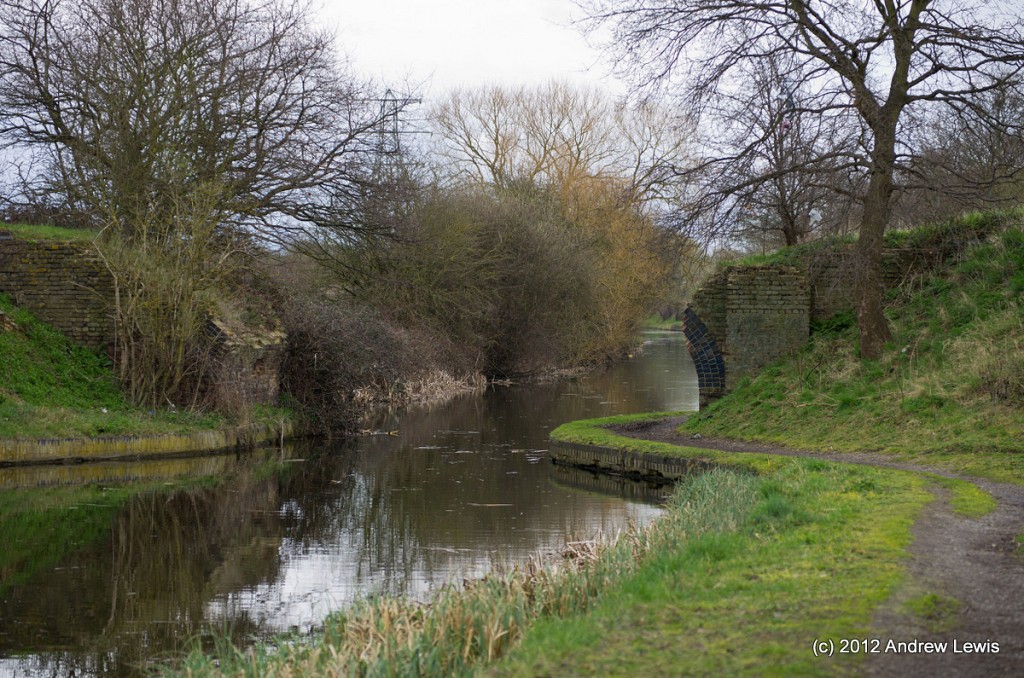 Shortly after the location of the missing (un-named) bridge number 5, comes a turning spot, followed by the last slight bend further northwards. From now to the end, at the junction, the canal runs very straight – the view ahead to the junction is blocked by several bridges, but from water level, one can see right as far as a wall by the side of the junction. 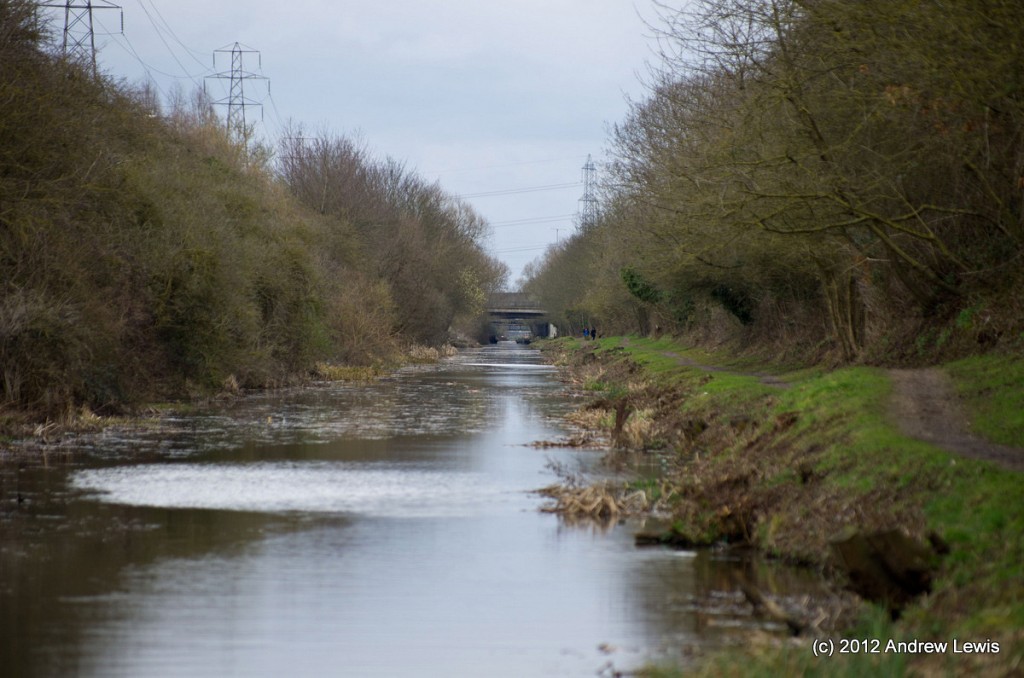 The straight run from Meads Bridge (4) to Cowley Peachey Junction

As the footsteps continue ever eastwards, the roar of the traffic on the M25 becomes louder until the canal crosses underneath the motorway, to the east of Iver.

Next, come a series of aqueducts spanning over the Colve Brook and River, as well as an area of water and several paths running into the Colve Valley Park. 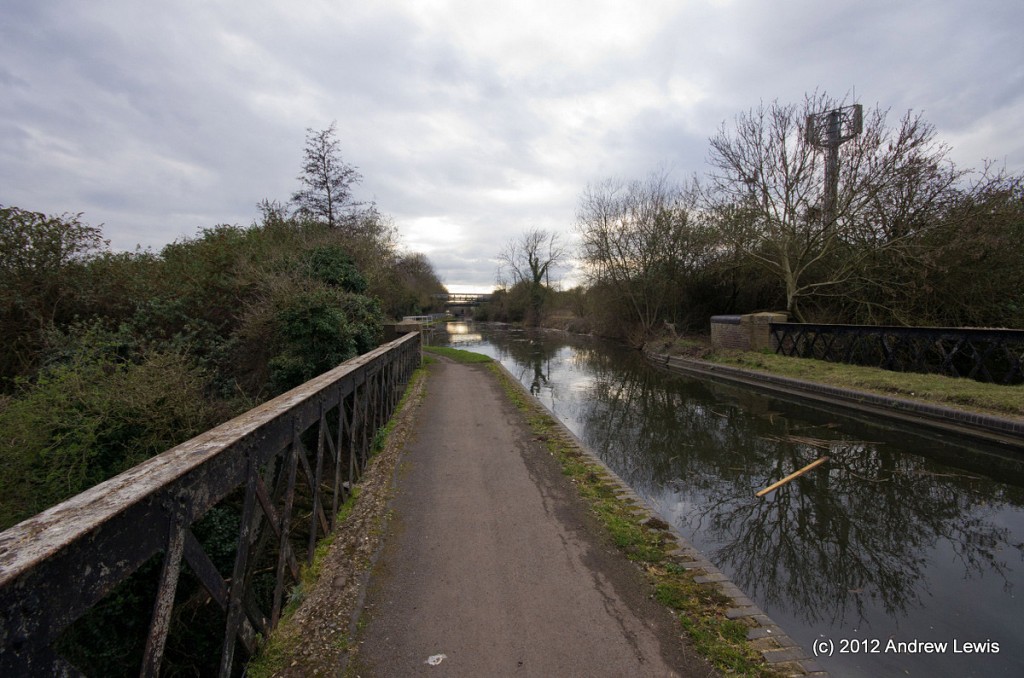 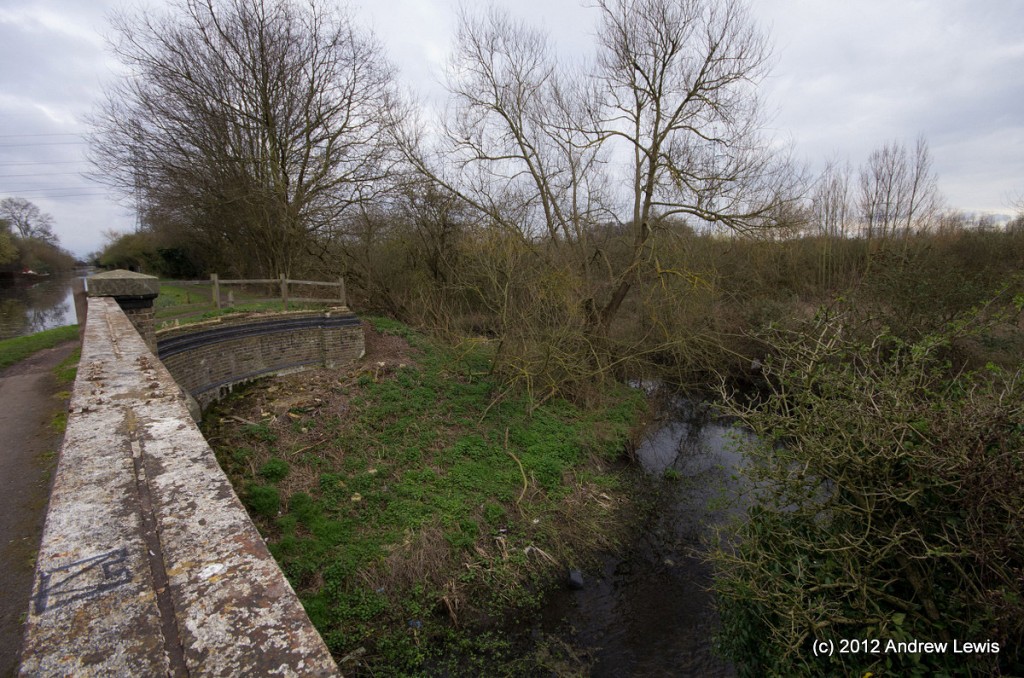 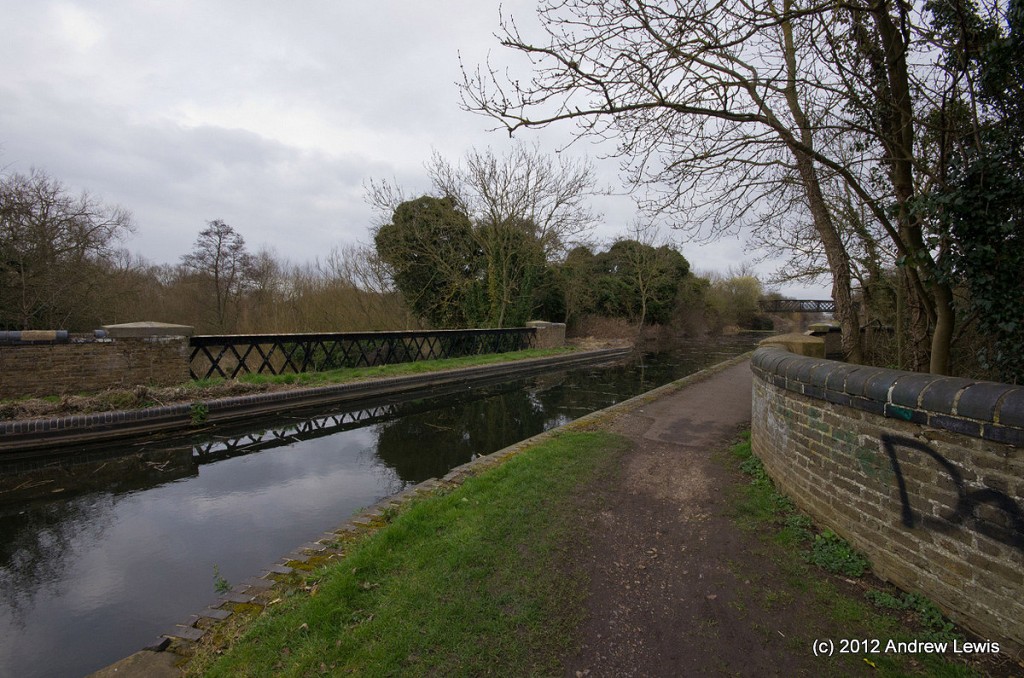 As the last of the aqueducts is crossed, the final two bridges come into view (Trout Land footbridge leading to Little Britain Lake) and the footbridge across to the Marina. 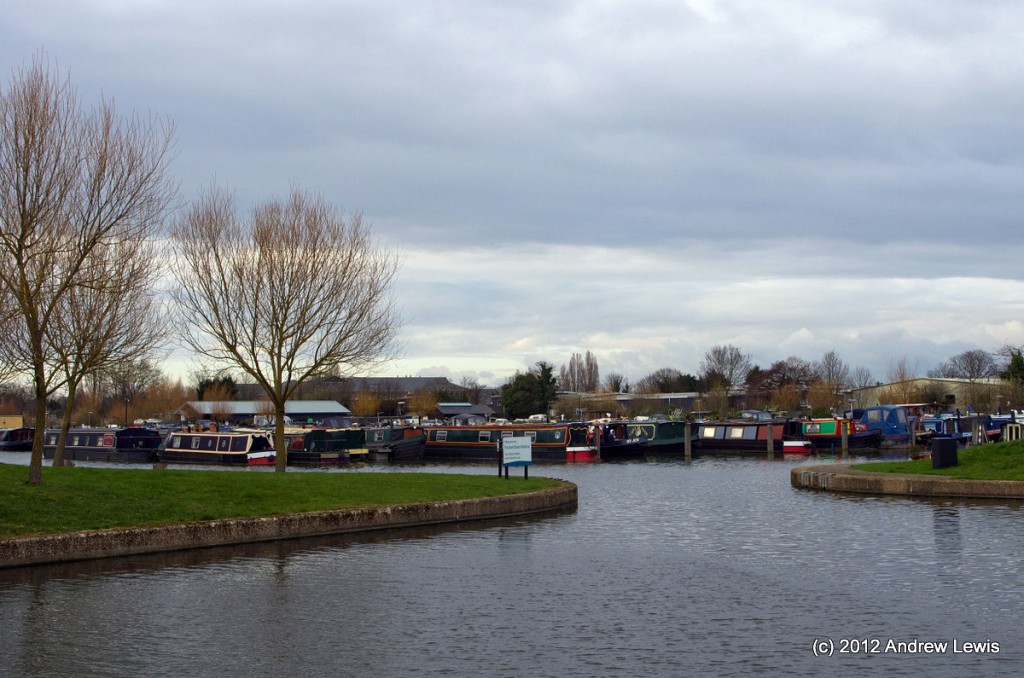 The entrance to the marina come sjust before the junction with the main branch of the canal. 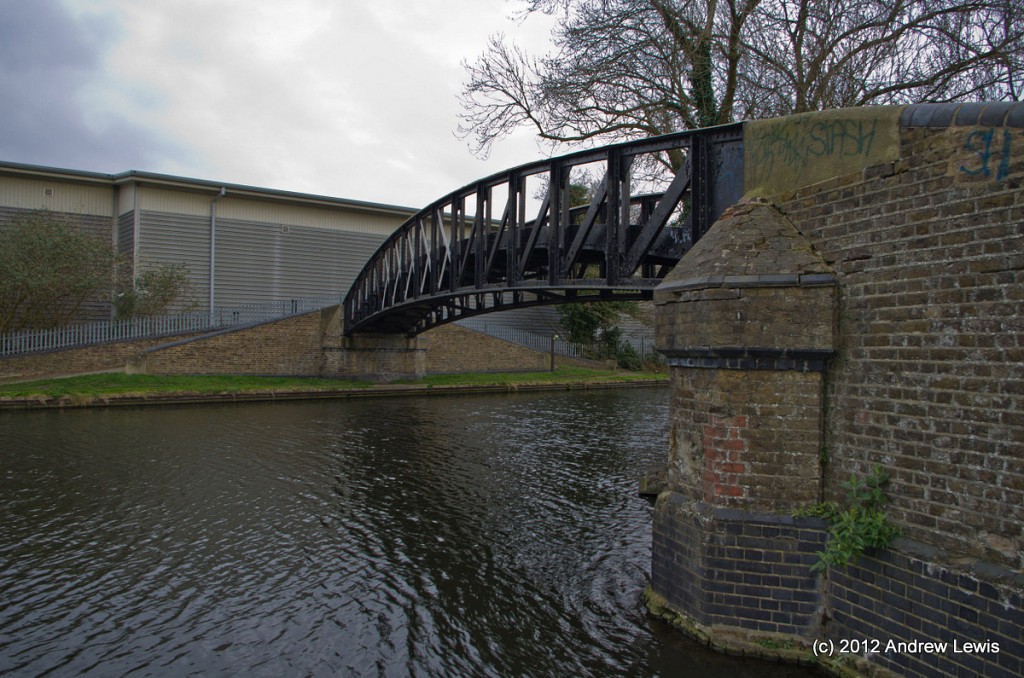 Bridge 190B at the junction 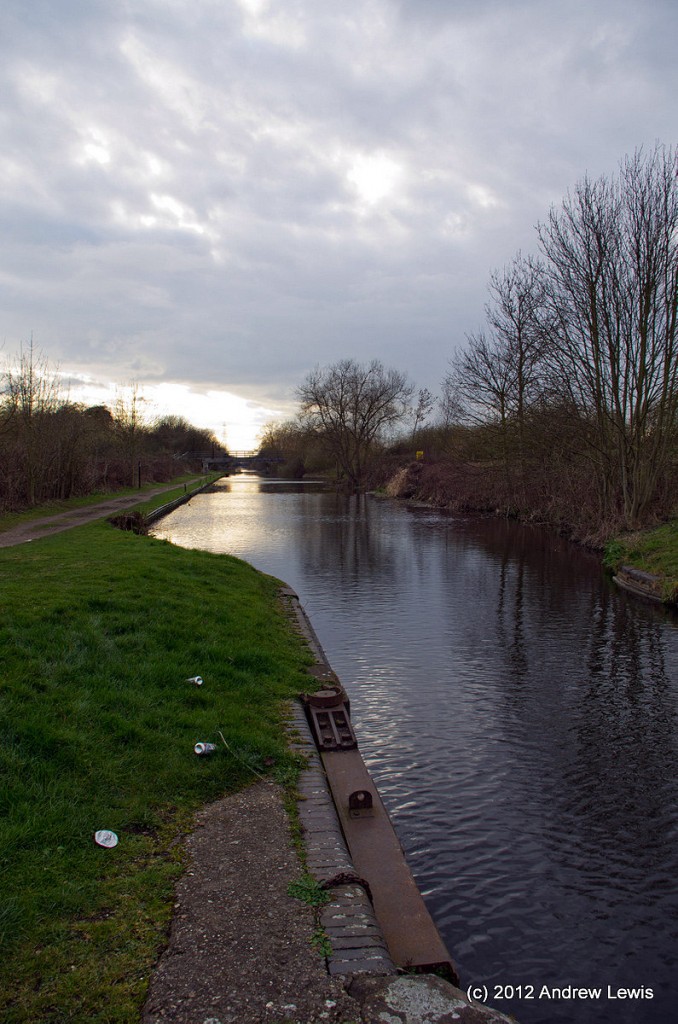 View westwards along the Slough branch, from Cowley Peachey Junction

Compare the scene here with that from the previous walk when the setting sun was sinking into the distance behind Slough. What a difference the sunshine makes! 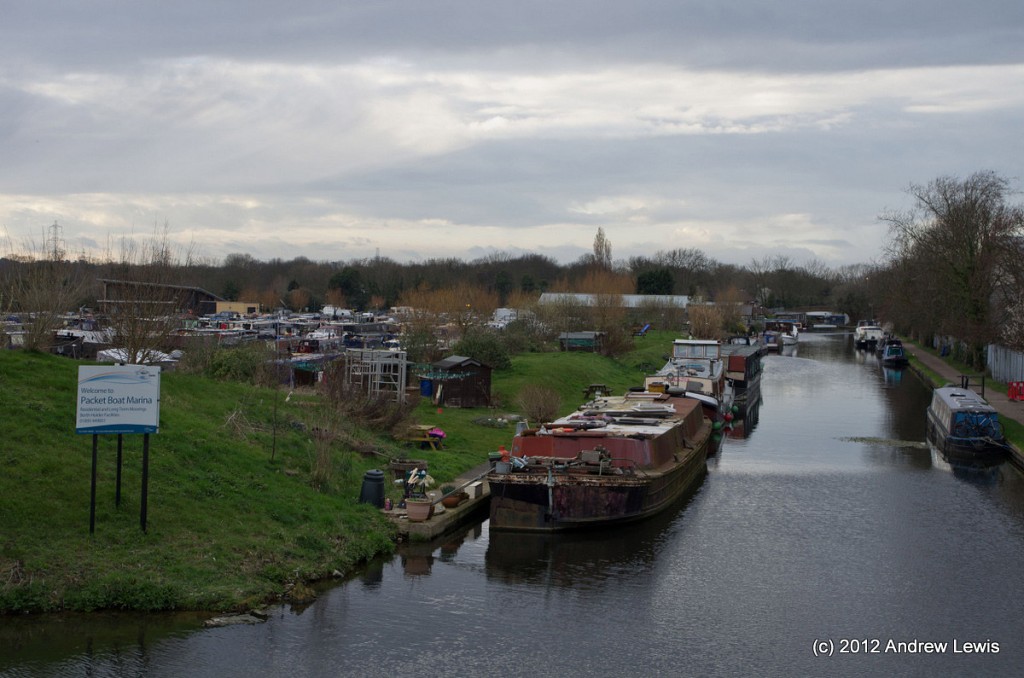 The marina seemed deserted of people on this cold, grey day. 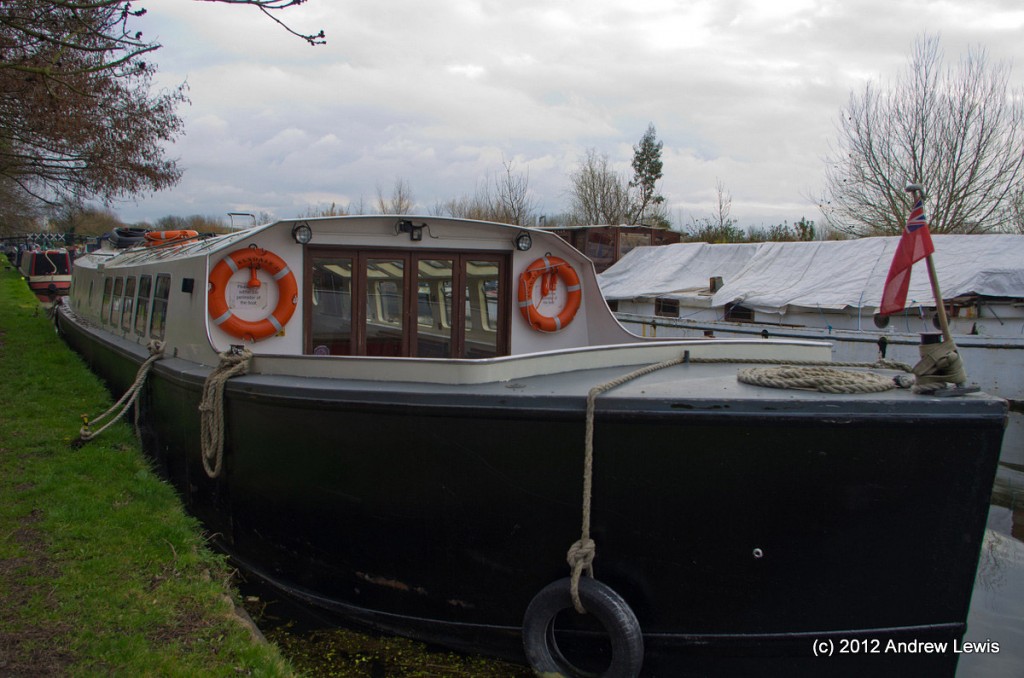 Well, that was the end of the Slough branch. Perhaps it would have looked better with more sunshine.  Never mind, five more miles under the belt, one less branch yet to walk. Time to hop back up to ground level at the Packet Boat Lane Bridge (190) and head off home.

I was using my Android phone and Google’s MyTracks to follow the progress of the walk. According to the GPS unit I had travelled over 10 km or just under 6.5 miles, for this section of the canal.