A week after completing the previous section of the Grand Union Canal, from Kew/Brentford to Norwood, the weather was fine again and I continued from where I ended last time, with the section from Norwood to Cowley Peachey Junction. Whereas I had previously walked parts of the stretch near Hanwell, this walk was on new territory for me. Armed with my camera and Android GPS, I set off. 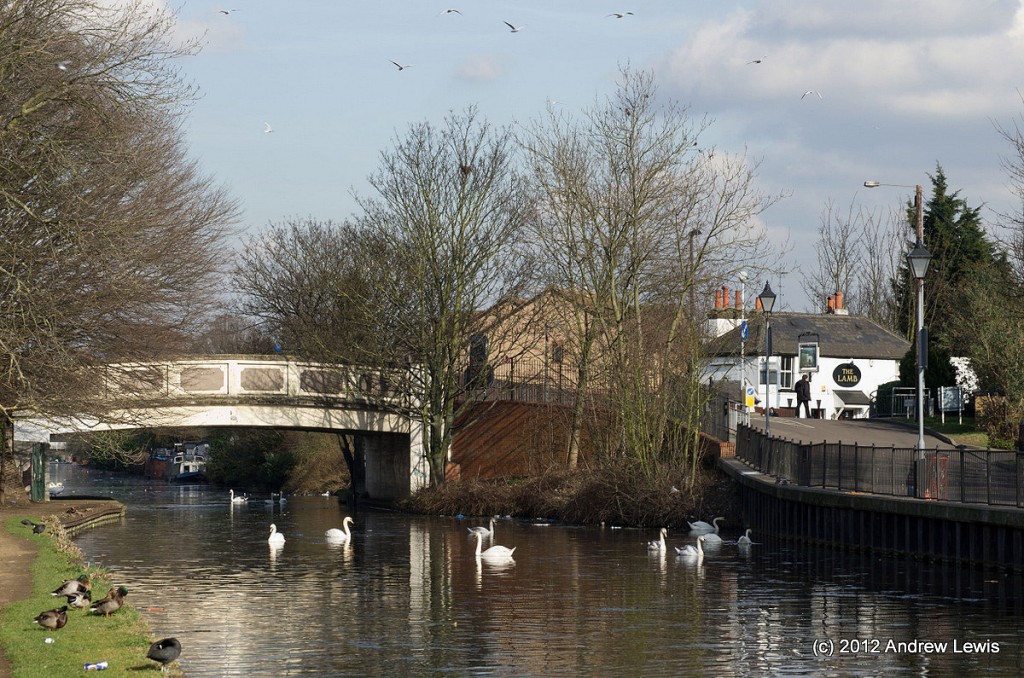 The star was at Wolf Bridge, next to The Lamb pub, with the path down from the bridge to the canal still surrounded by several swans. Very soon, North Hyde Bridge (202) came into view on a bend.

Then follows a fairly straight stretch by the side of another pub and a park before a series of large stores come into view on the southern side, next to a Wet Dock. 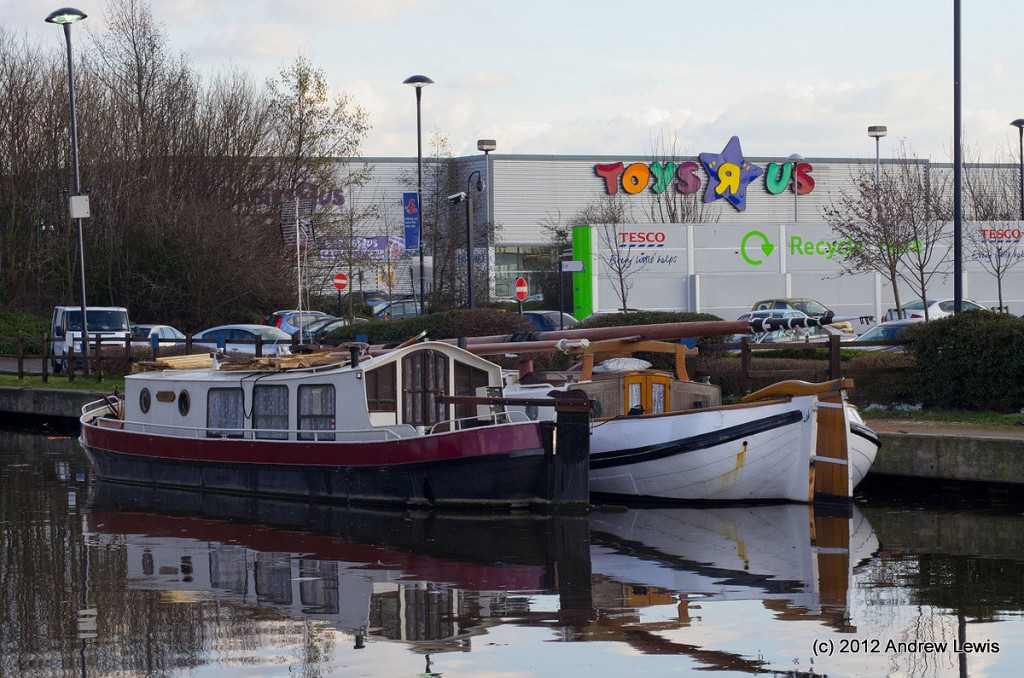 Tesco and moorings near the Wet Dock 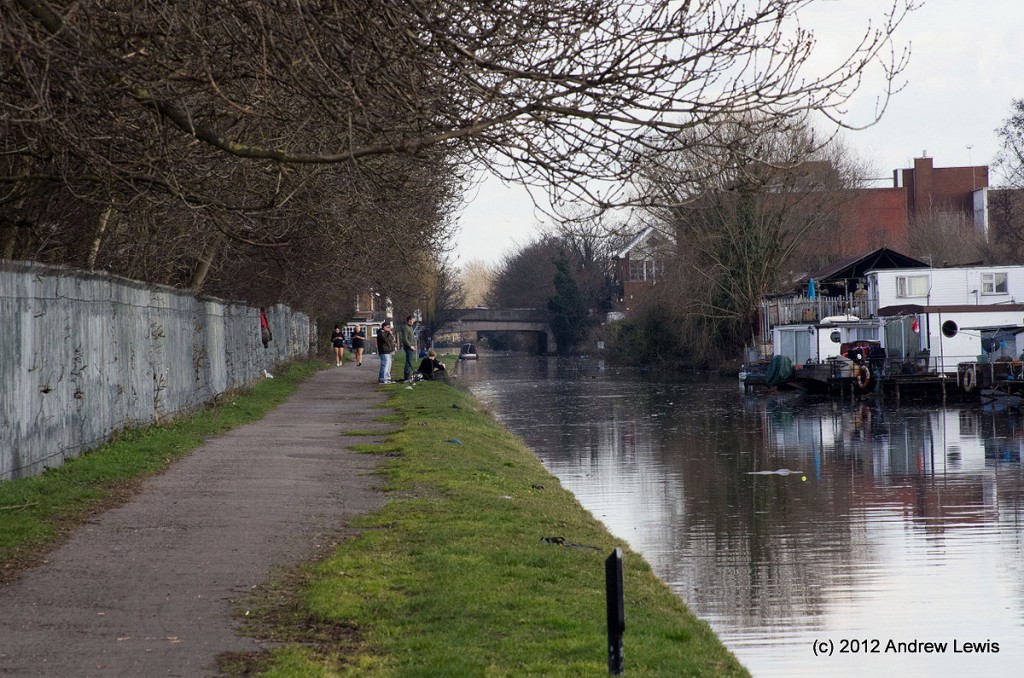 Looking back towards Western Road Bridge (201)

Another bride (201 – Western Road Bridge) crosses next, half way between the North Hyde Bridge and Bulls Bridge Junction. The junction itself is then announced by a white coloured arched bridge running north-west to south-east across the Paddington Arm where it joins the main branch of the canal. This is Bulls Bridge, which gives its name to the junction. 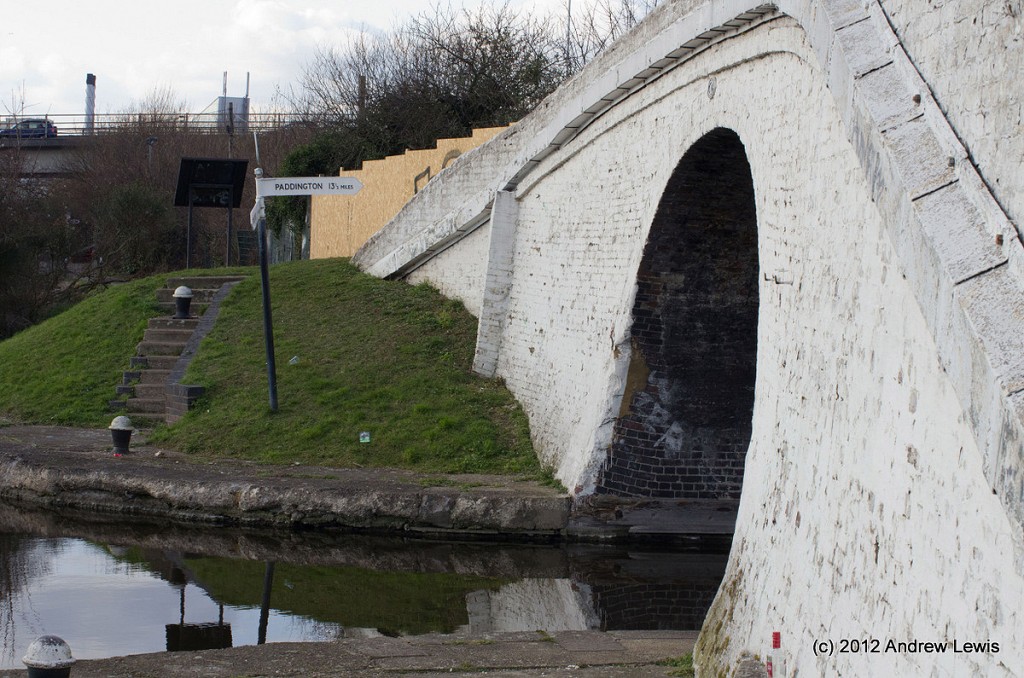 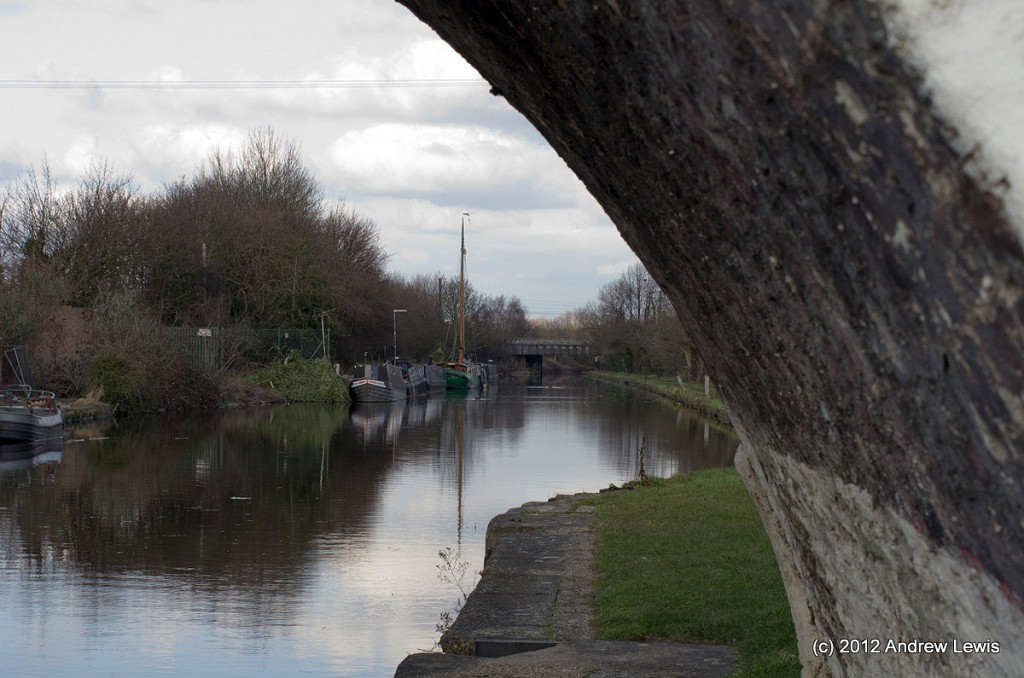 View under Bulls Bridge, looking along the Paddington branch 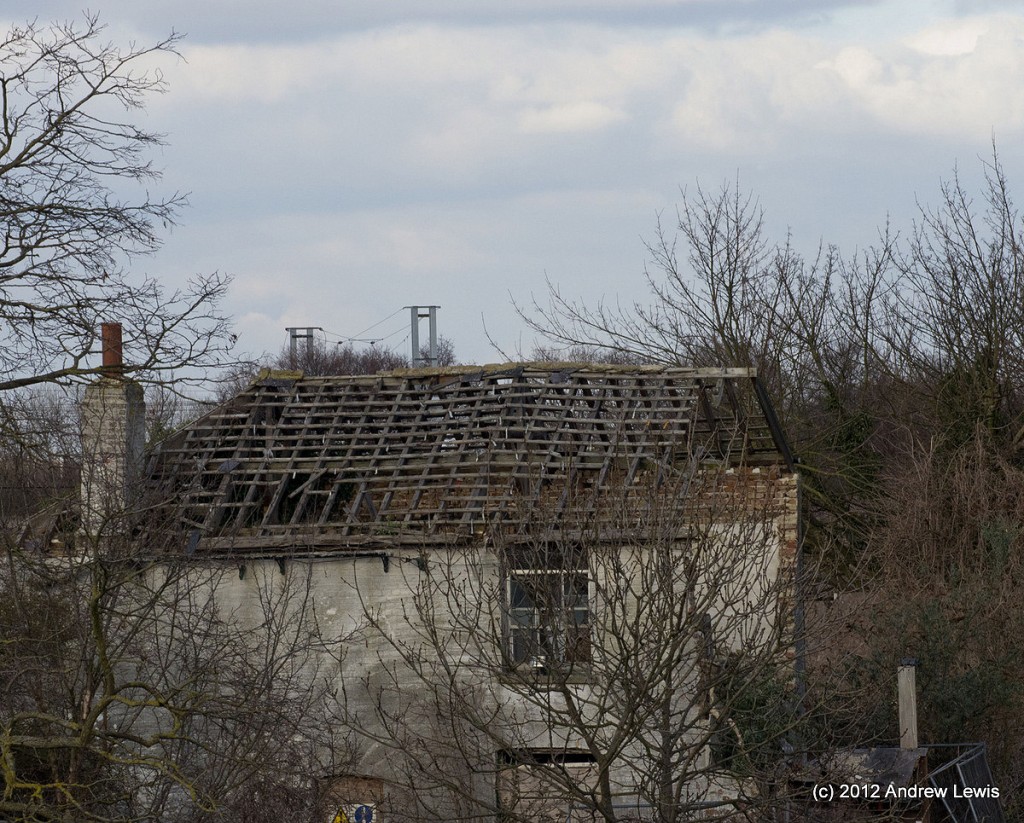 Just to the north of Bulls Bridge was a derelict out shell of a house. More attractive were the boats moored in the early reaches of the Paddington Arm. 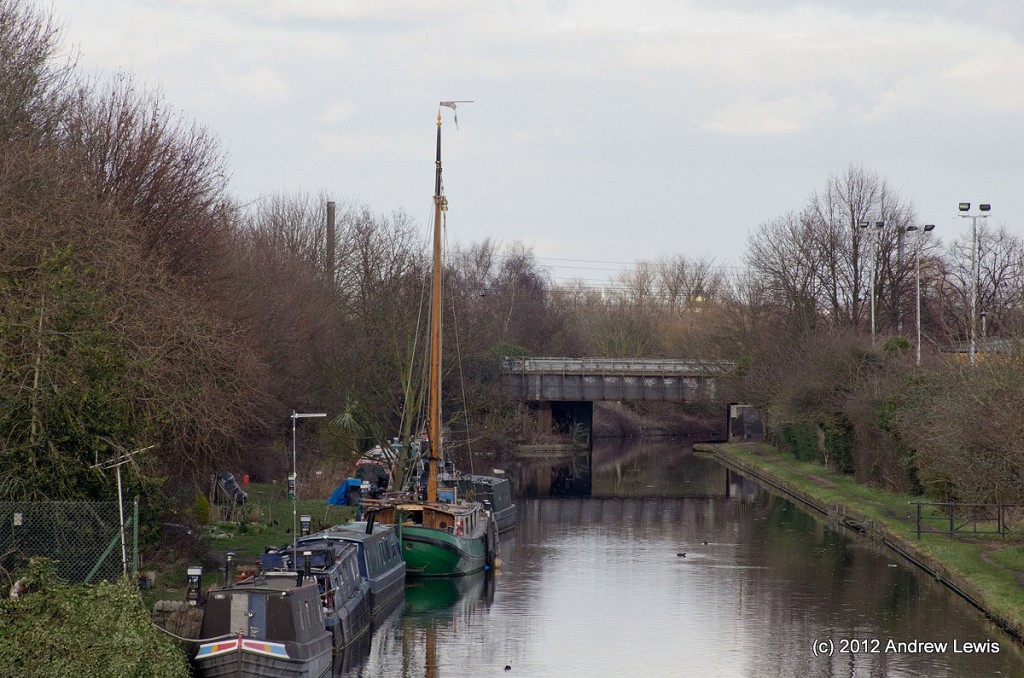 View of the Paddington branch from atop Bulls Bridge

As far as pretty scenery is concerned, this is the last to be seen for a while as the main canal now runs alongside the rear of a large Nestle factory, with huge buildings, miles of pipes and columns of steam rising into the air. Curiously there was a strong smell of coffee in the air – I suspect Nescafe is running around in those pipes, in some form or another. 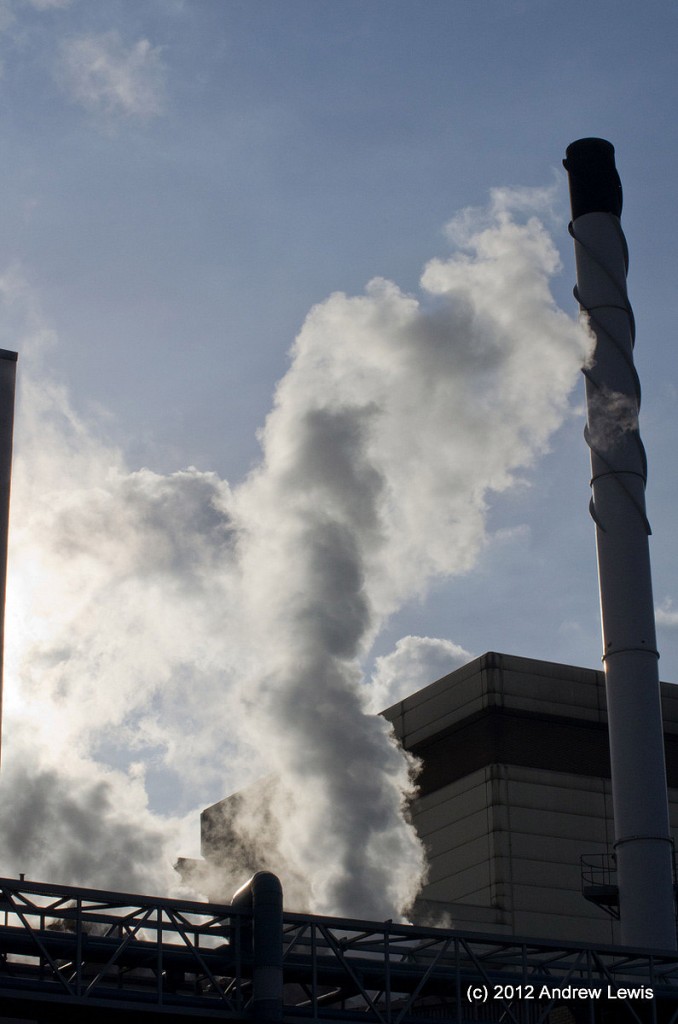 Steam from the Nestle factory

New apartment blocks are gradually creeping in alongside the southern bank of the canal, breaking up the industrial landscape with some more pleasingly contemporary, though with frequent noise from the nearby mainline railway which crosses the can here on bridge 200B. 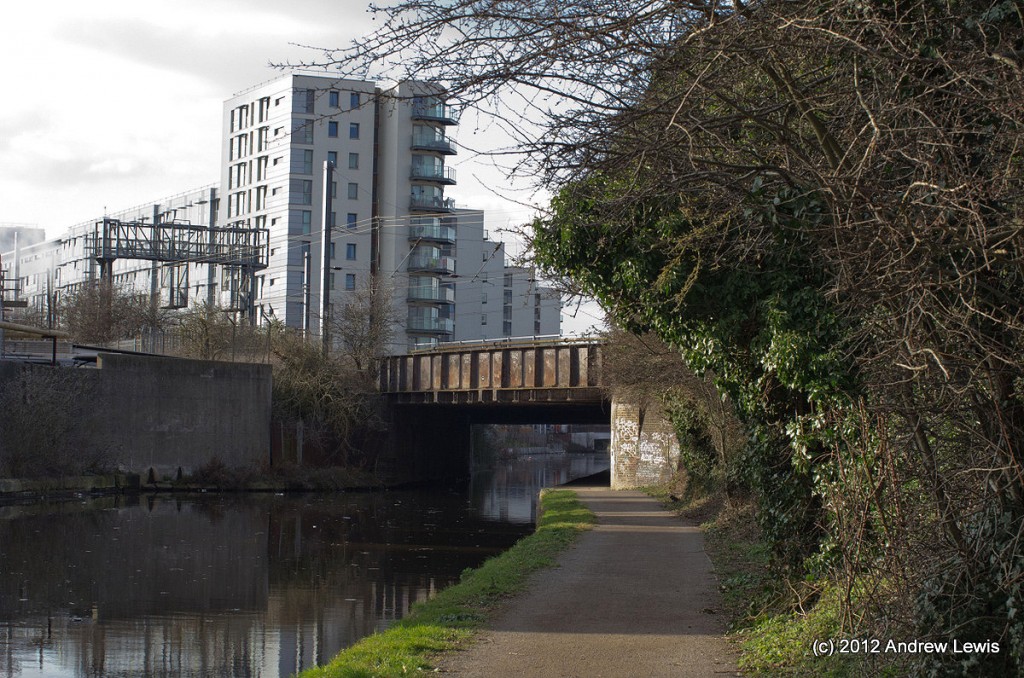 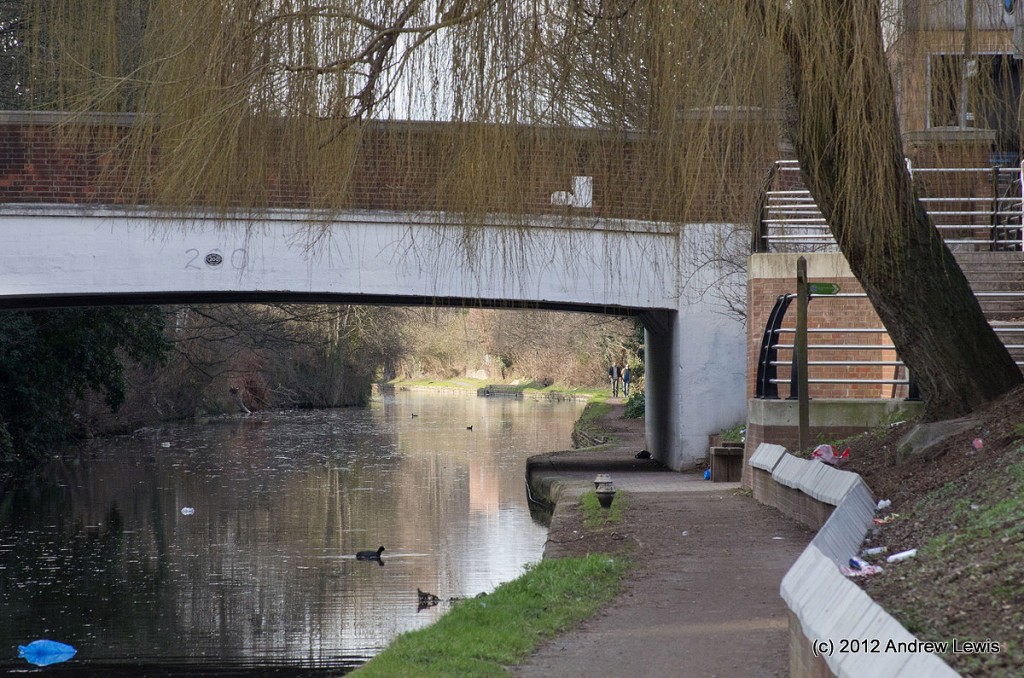 Another bridge, (200 – Station Road Bridge) follows after a bit of urban regeneration and a new embankment wall with steps alongside the towpath. 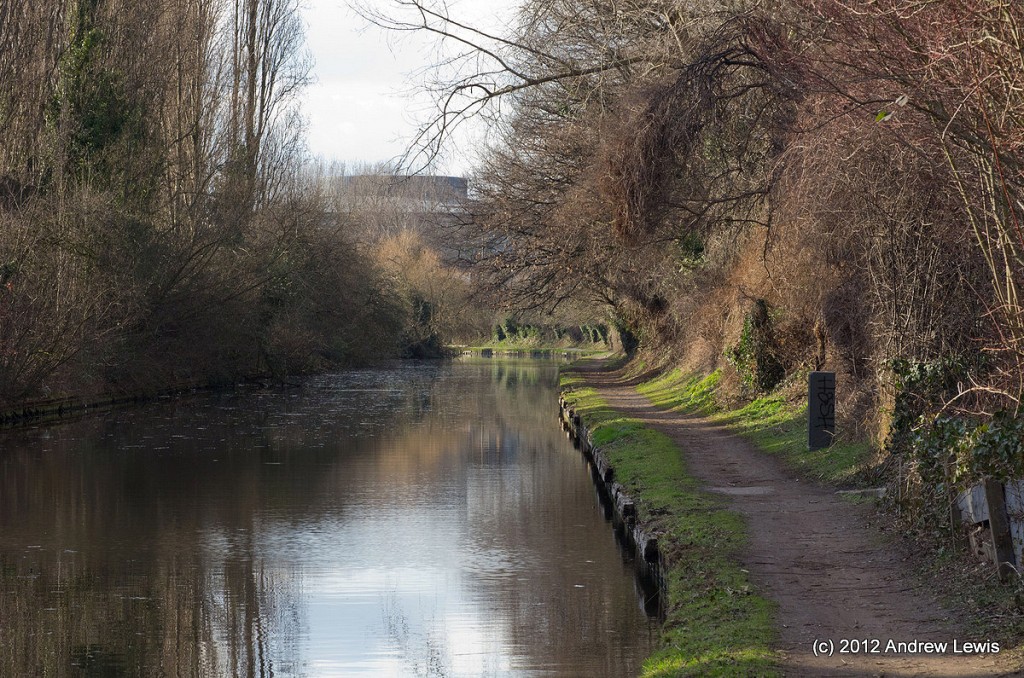 View from Printing House Lane Bridge towards the west

A little further along the urban view to the right is replaced by overgrown banks, leading out to parkland beyond. Printinghouse Lane Bridge (199) comes into view, surrounded on both sides by pleasant wooded embankments, before the canal takes a slight bend to the left at Woolpack Bridge (198). 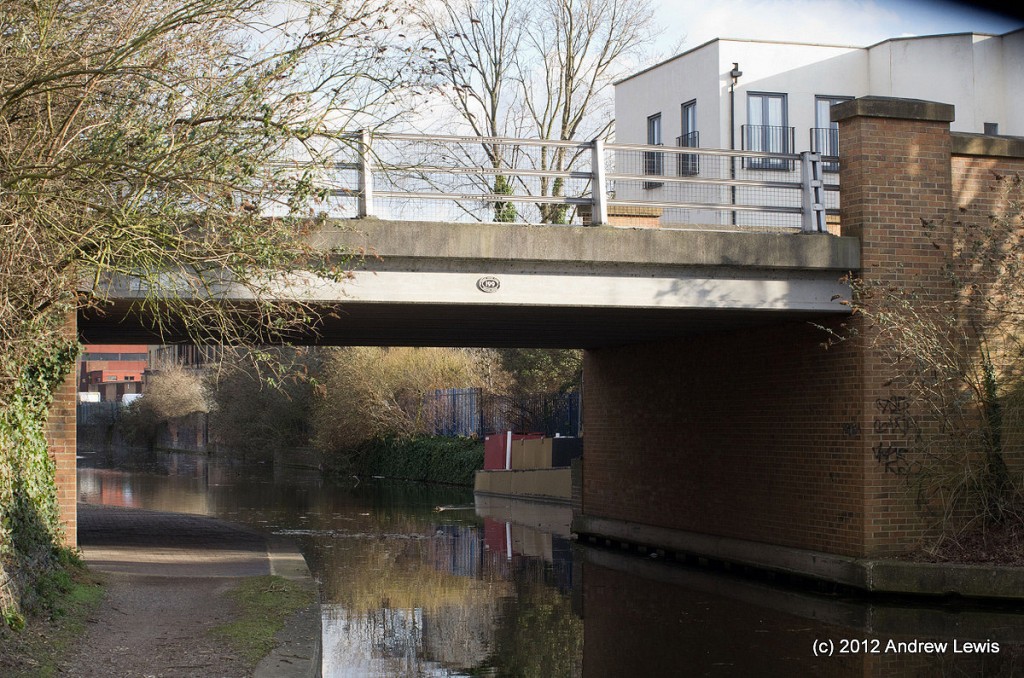 A quick run up the steps at the Woolpack Bridge to see the nearby pub of the same name shows that this is not an offshoot of ‘Emmerdale’. Rather, as hinted at by the sign advertising the striptease artistes at the pub, the ale here is real, but other sights may not be… 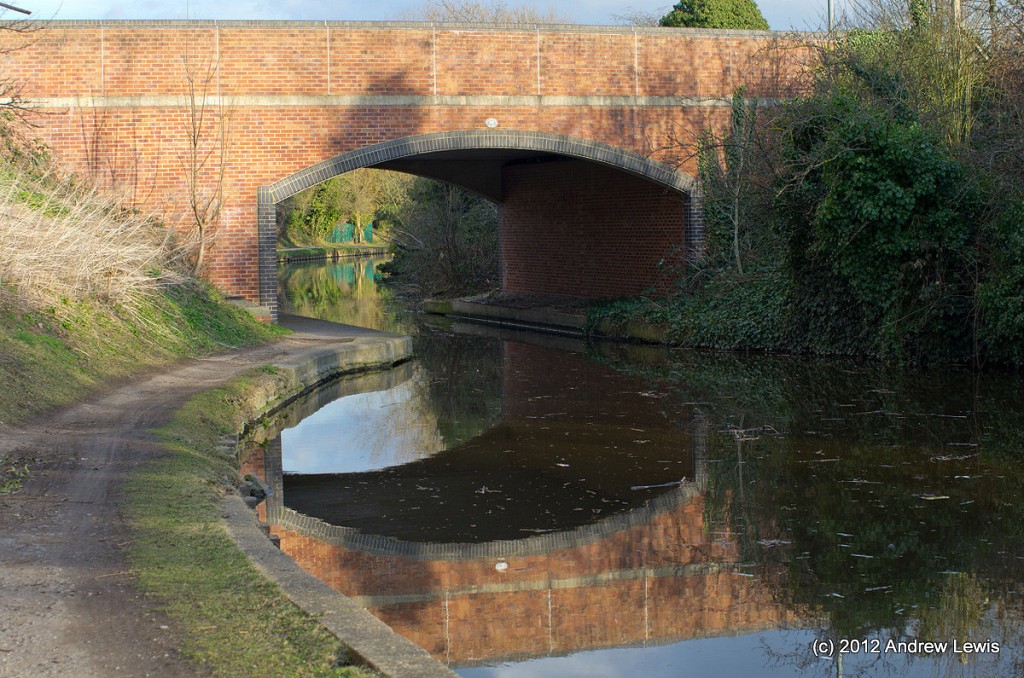 After the Woolpack Bridge, there bend continue a way up to the next bridge (196) which is Rigby Lane Bridge. The keen eyed will have noticed that bridge 197 is missing. Perhaps the concrete on the towpath is a remnant of a bridge which used to be here? 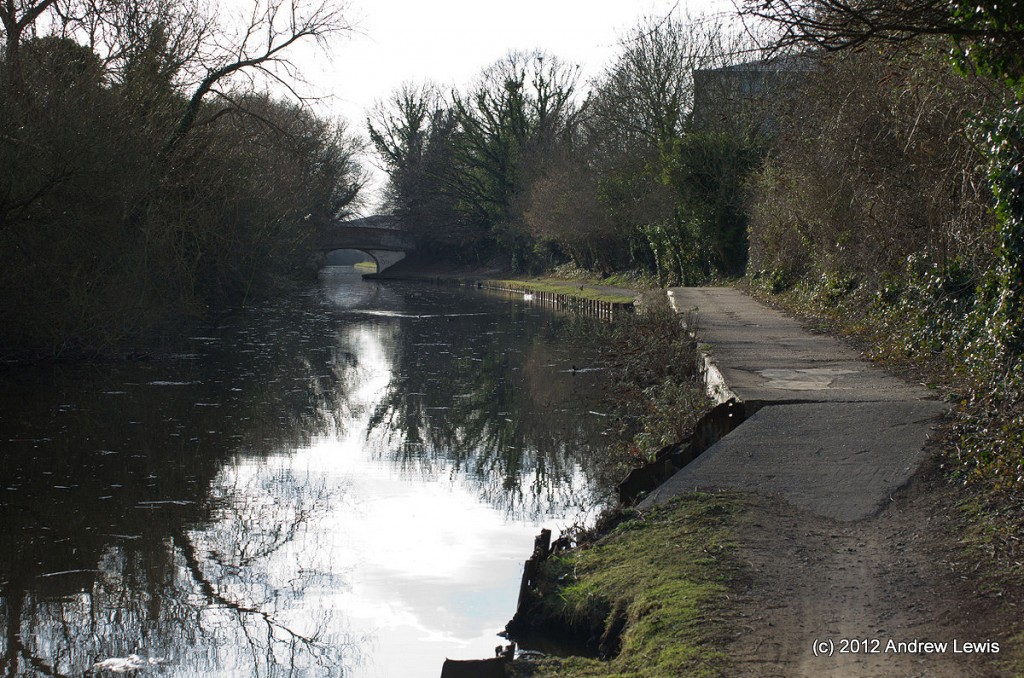 The canal now reminds everyone of it history, as a transport infrastructure – a large cement works runs along the southern side of the canal in the vicinity of Gravel Wharf and Stockley Bridge (195A). 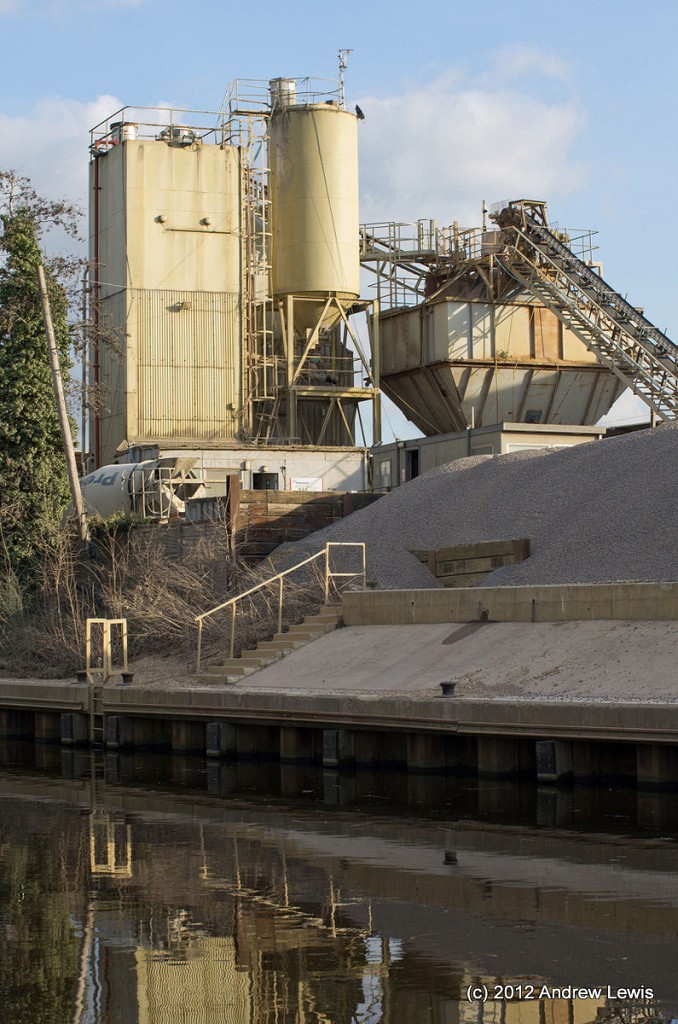 Even on a Sunday, when this walk took place, the cement works was partly operational – a cement lorry started it engine and set the rear hopper in motion, seemingly awaiting a filling of cement for an imminent delivery. 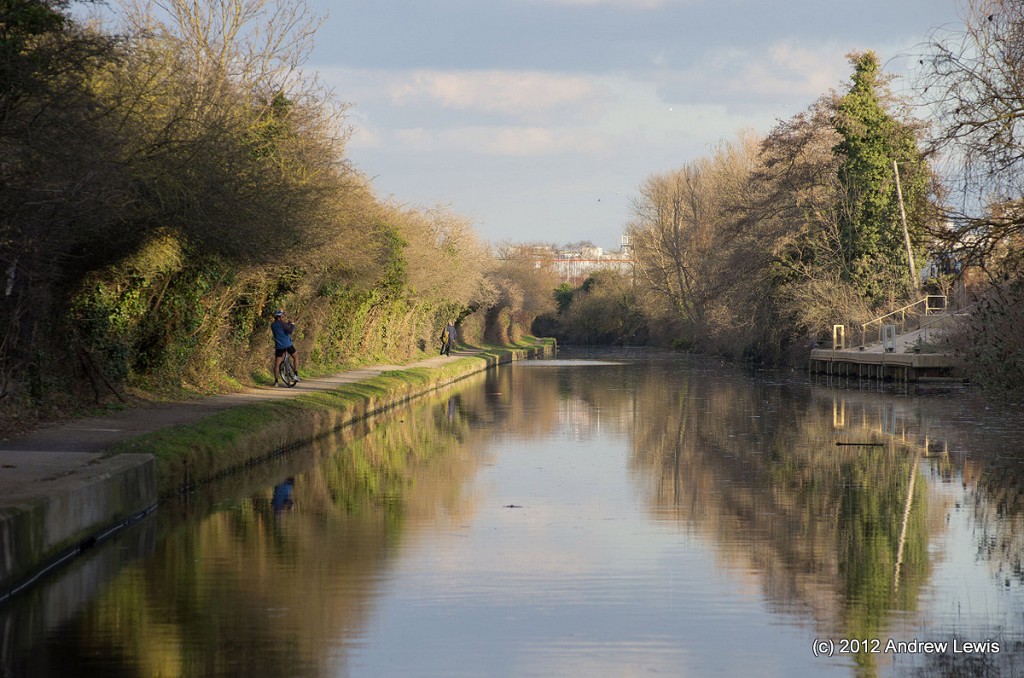 The towpath here is quite pleasant – a compacted gravel surface, with overhanging but cut back trees and shrubs at the side. 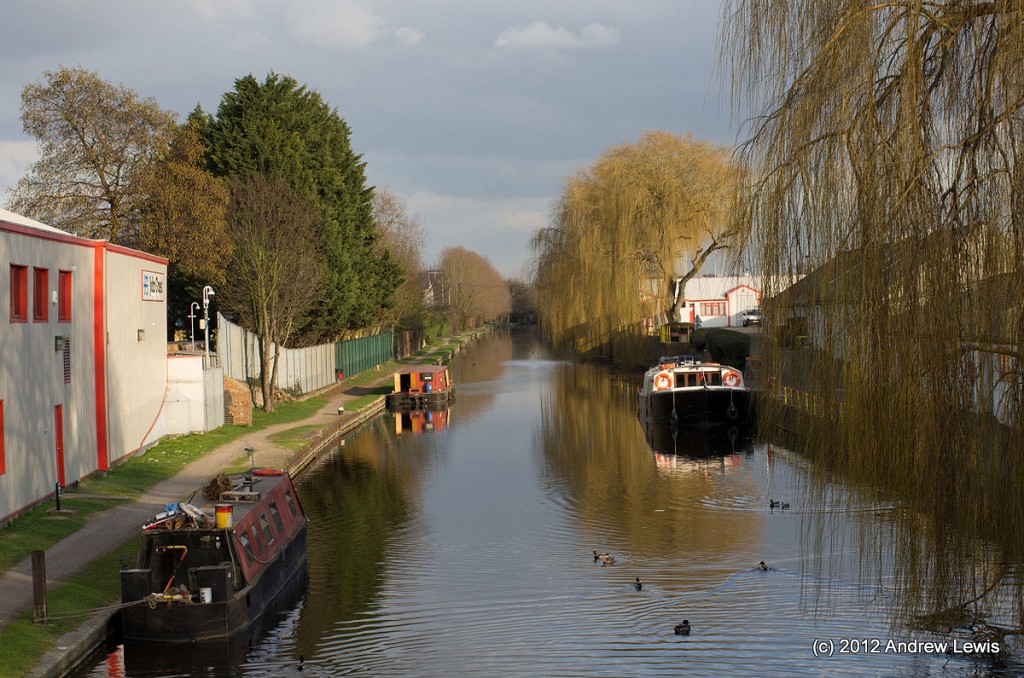 Looking backwards from atop Horton Bridge (193)

The Gravel Wharf section now runs beside the main Paddington railway line and every few minutes there were trains running past. I took the opportunity afforded by Horton Bridge (193) to cross over the canal and use the adjoining foot bridge to get a view of the railway. 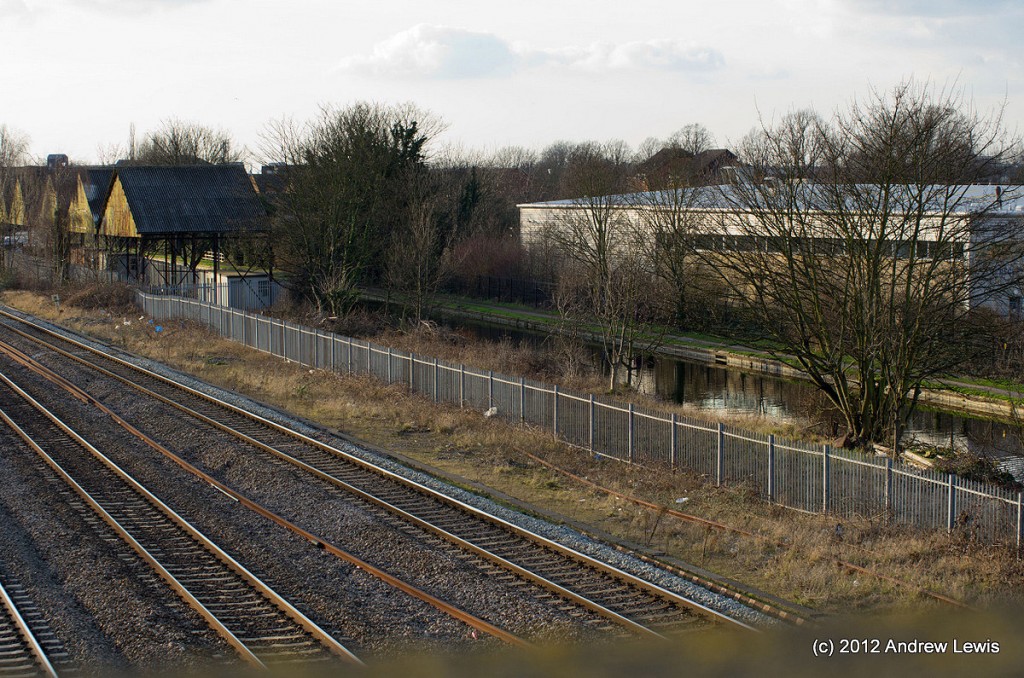 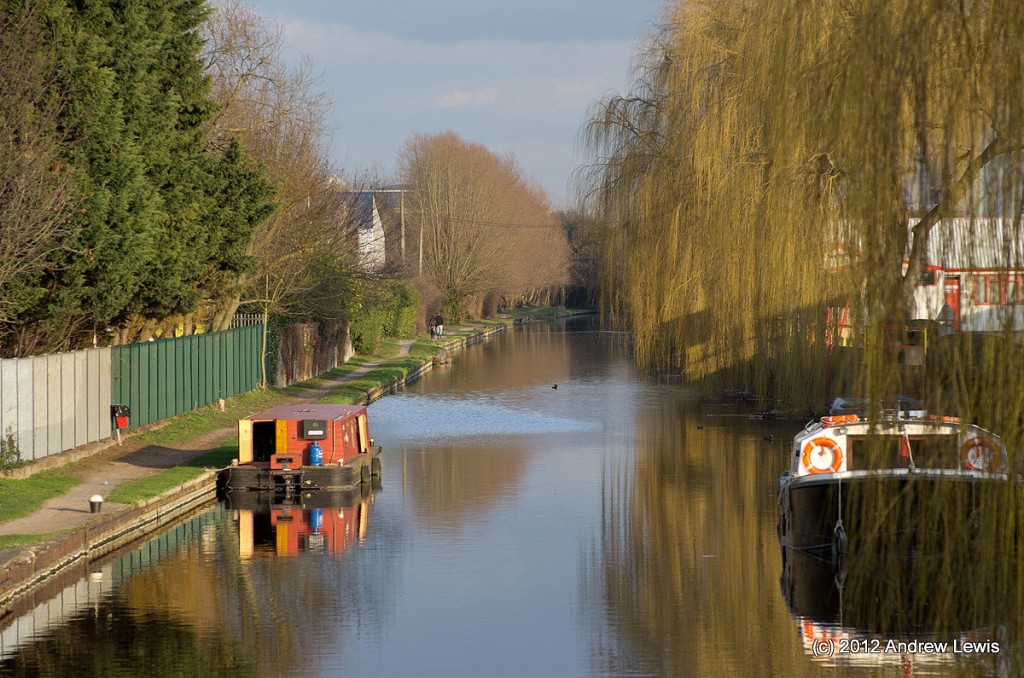 Another look backwards from Horton bridge in the late sunshine

After watching a few trains go by, the setting sun came out for a last time and I snapped a few pictures of the locale in the warm sunshine, including the white painted Horton Bridge itself. 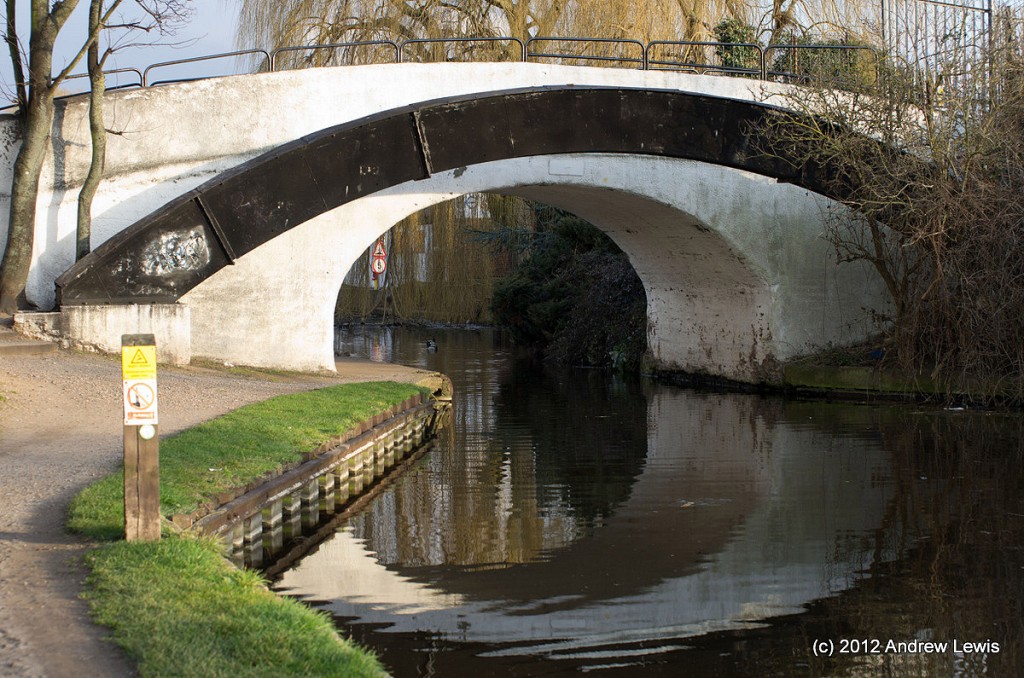 There was only just over a mile left now to Cowley Peachey Junction, and the canal undergoes a few small wiggles, passing underneath Colham Bridge (192) and then Trout Road Bridge (191) as it enters Yiewsley. 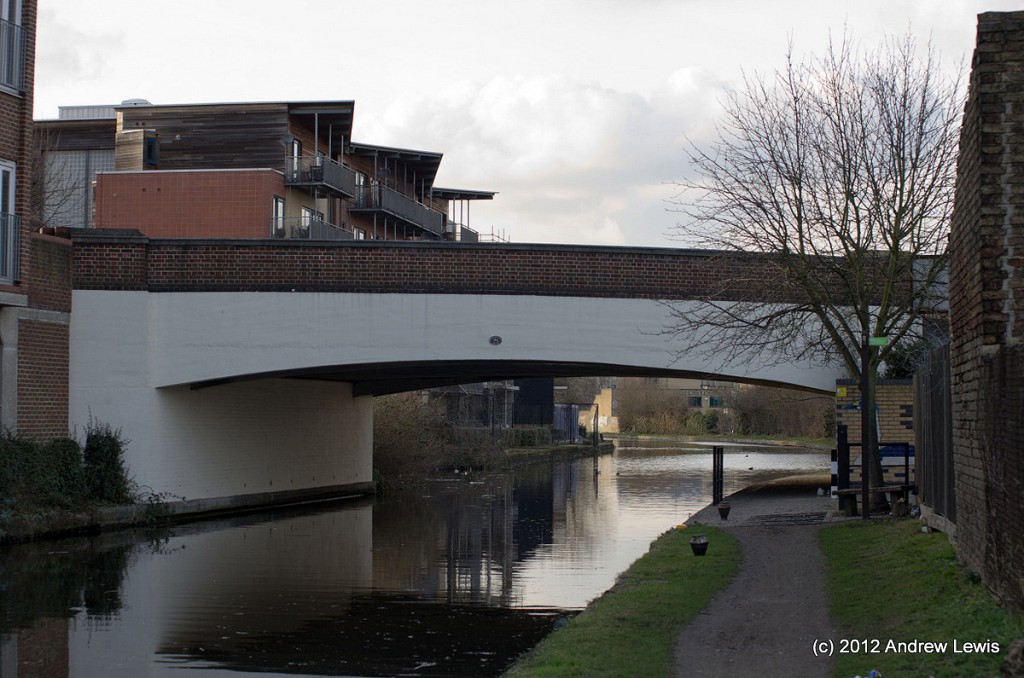 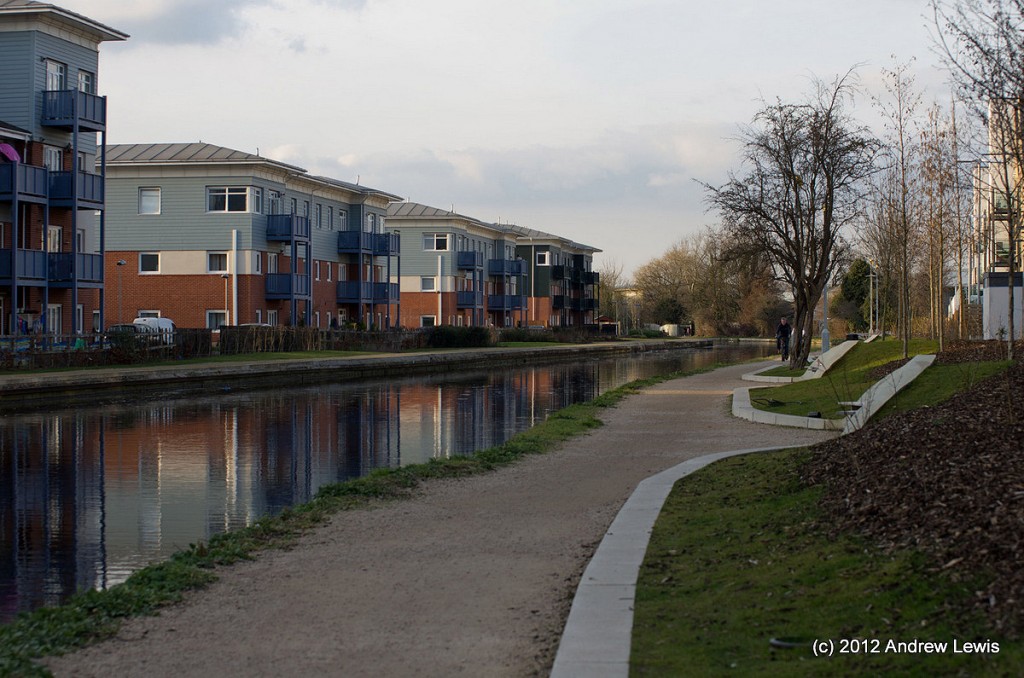 New flats alongside the canal’s westerntowpath at Yiewsley

New apartments surround he canal, red and blue on one side and yellow brick and white stucco on the other. The towpath has been renovated and there are new seating areas alongside the entrances to the apartments. 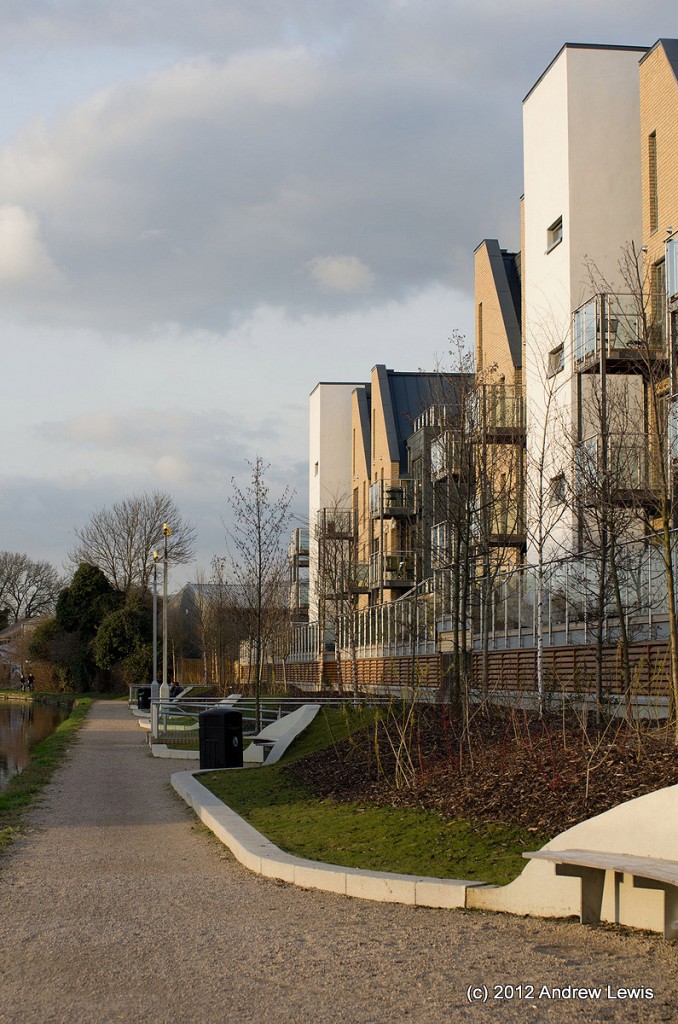 New flats alongside the canal’s eastern towpath at Yiewsley 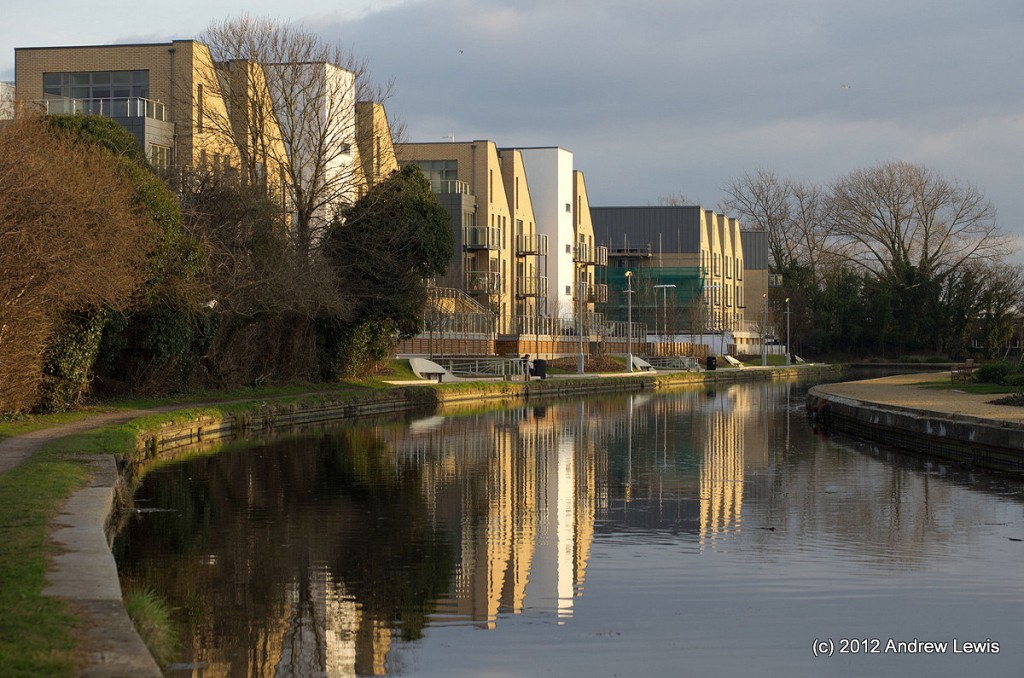 Looking back towards the new apartments at Yiewsley

One final curve later and the Packetboat Lane Marina and Cowley Peachey Junction come into view under bridge 190B. 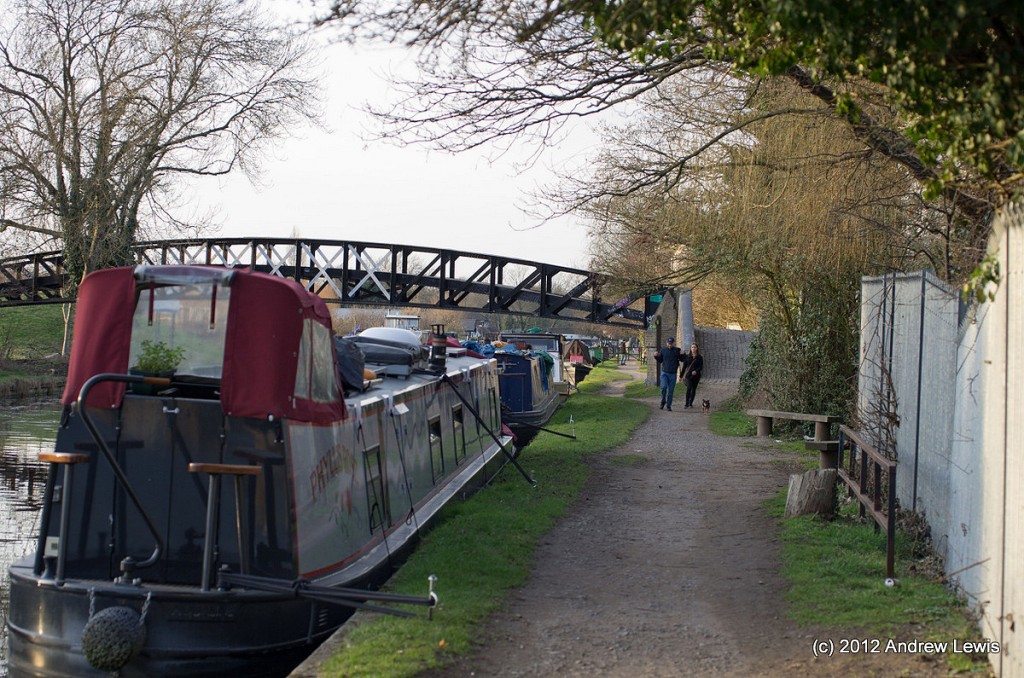 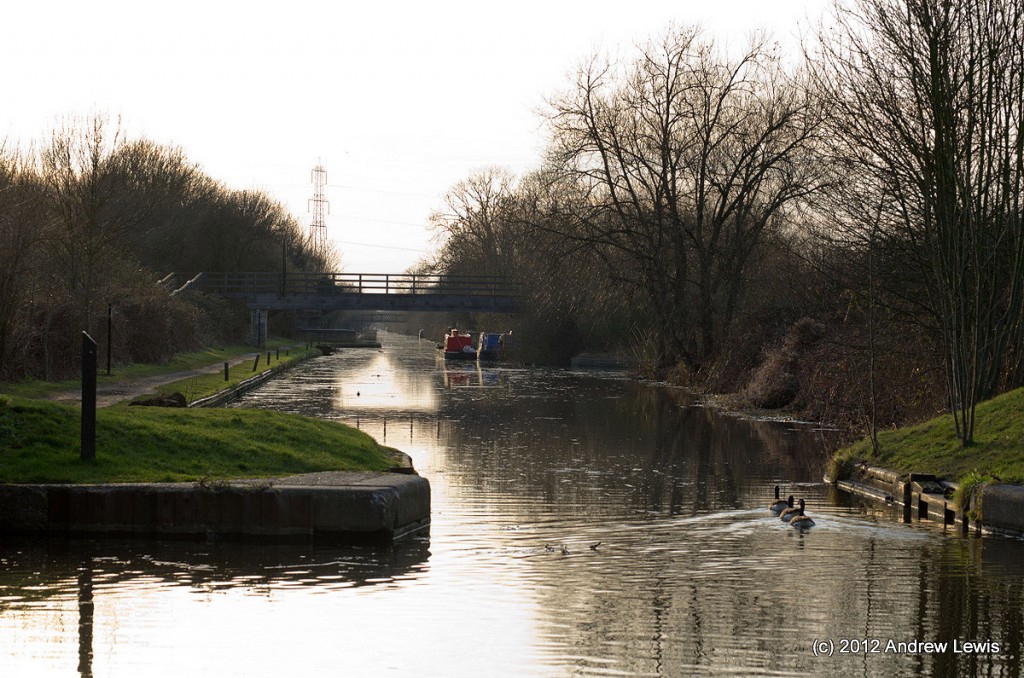 Looking westwards into the setting sun on the Slough branch

The Slough branch joins the main section here and the late afternoon sun was shining almost directly along this offshoot which seemed to stretch straight into the distance. No time to explore this 5 mile stretch today – the light was fading and the warm sunshine was starting to lose its edge. 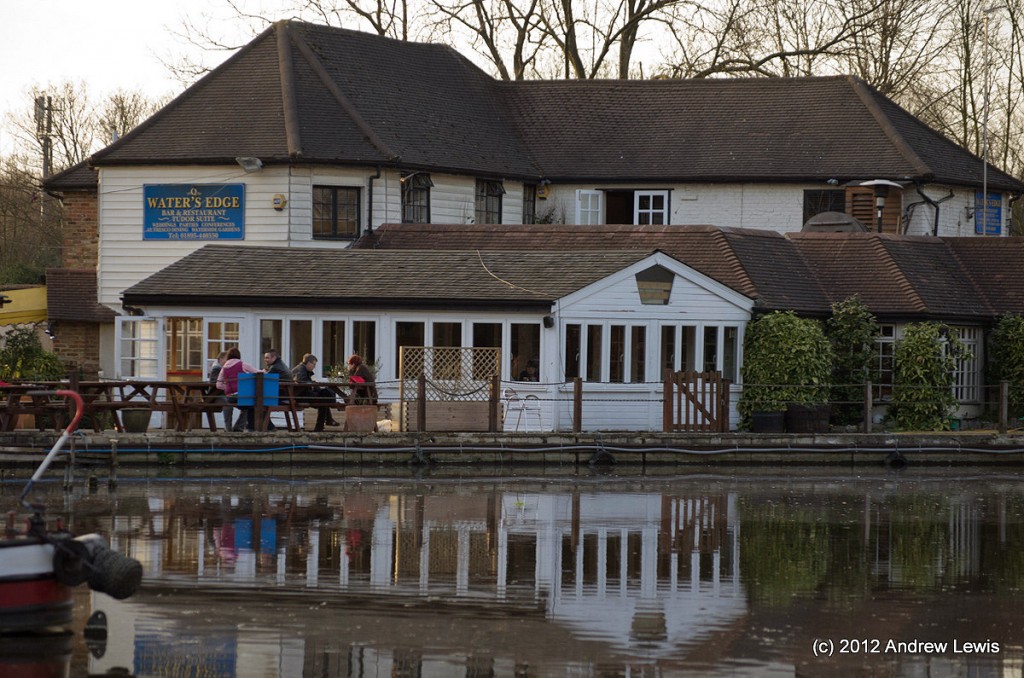 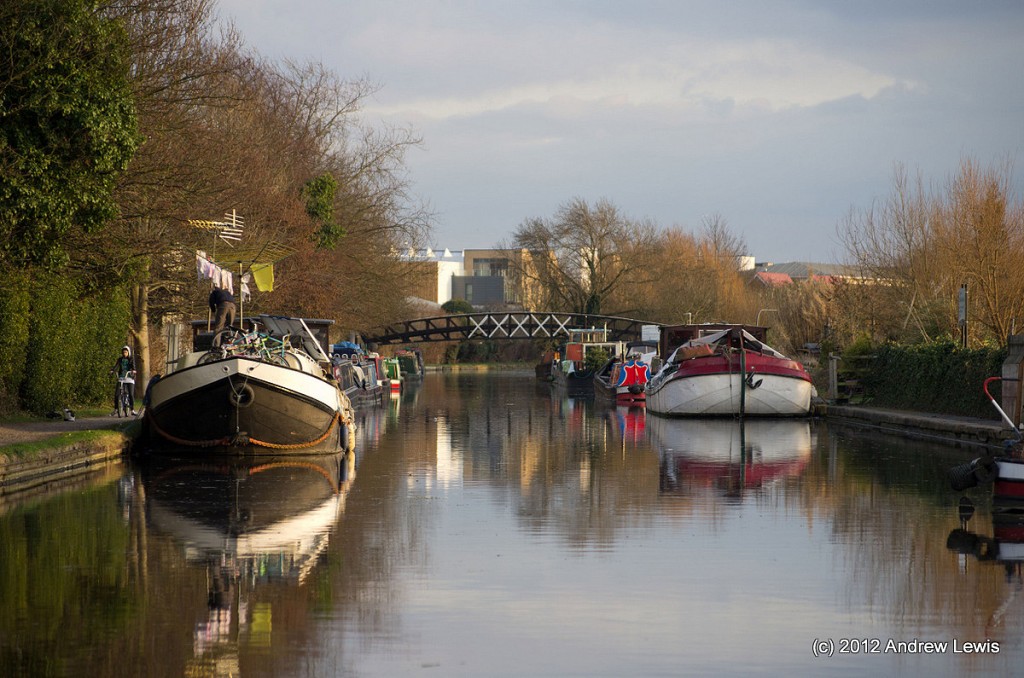 A brick bridge opposite the marina buildings looks like it may have been planning to take another offshoot to the east, but it simply leads to a small pond at the edge of a car park. 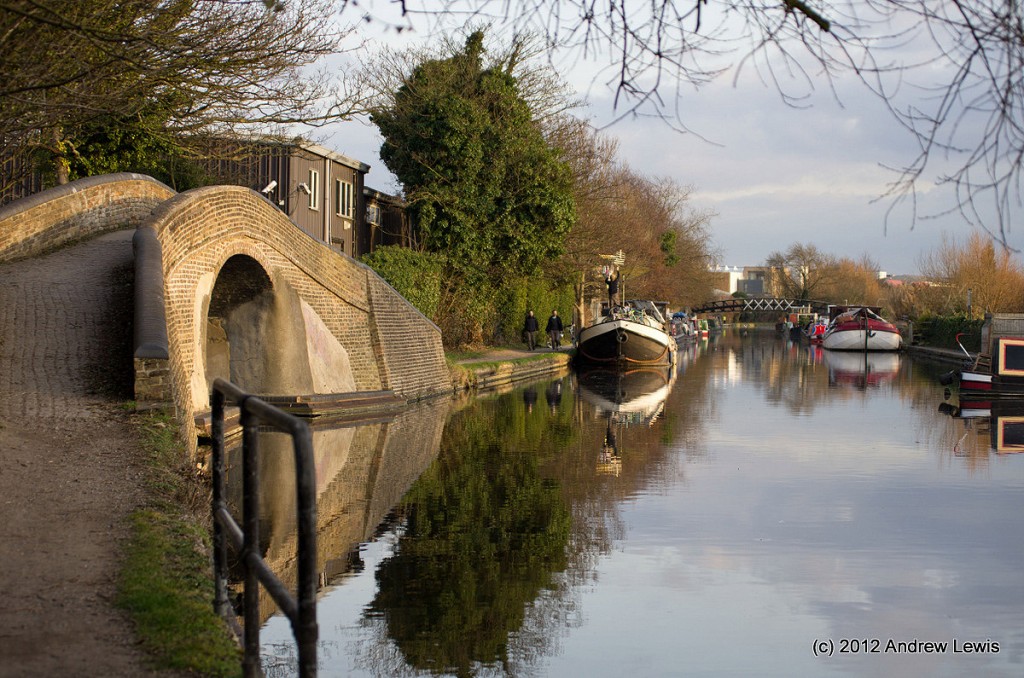 For now, the walk was over, and I ascended up to Packetboat Lane Bridge (190) and headed off to the A408 and the way home.

I was using my Android phone and Google’s MyTracks to follow the progress of the walk. According to the GPS unit I had travelled over 11 km or 7 miles, for this section of the canal.