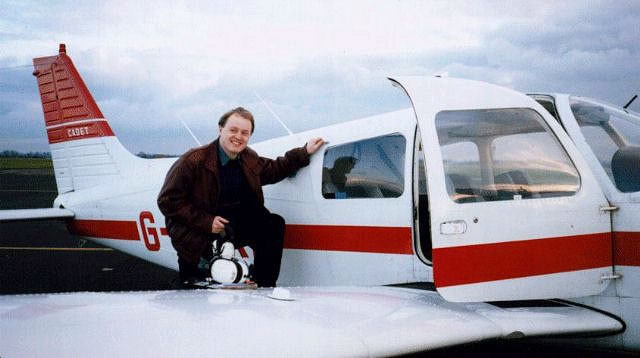 This is me, and an aeroplane. I’m the one with the smile, the plane is the one with the wings, just in case it’s not clear :-). This was my very first ‘trial flight’ in 1993, well New Year’s eve 1993 to be exact, at Leicester Flying Club. In case you’re wondering, yes I did make a good landing first time with the the instructor only giving verbal assistance. I took it up and I brought it back, and lived to tell the tale! That was in a Piper Warrior with me in the left hand seat. I’ve had a few more flights since then, including some aerobatics in a Cessna Aerobat, a rather interesting approach through a snowstorm at about 30 degrees to the runway (instructor in control) and a rather wobbly touch and go in a 20 knot crosswind :-#.

Unfortunately time and avgas wait for nobody, so until I get more free time and money, ‘Biggles’ has to make do with the occasional ‘trial flight’, rather than biting the bullet and signing up for the PPL course. All those jets flying over from nearby Heathrow (I live in Teddington, only a 15 min drive away) just seem to be rubbing it in. Now where did I put my Bottlang/Jeppesen and MS Flight Sim?

If there’s anyone out there in Cyberland who would like to sponsor me……. 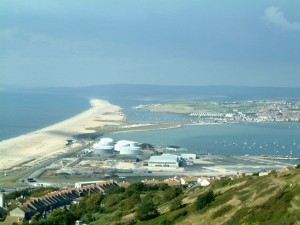 Yes, it’s everything you think it is in the UK. Cold. Wet. Freezing. And immense fun, when you get it right. The feeling of skimming over the surface (usually Portland Harbour in September) as the wind lifts the board and sail, and it planes and steers with the slightest pressure of your feet…..ahh. Now if I could only master gybing without killing the speed or falling off. And then there’s waterstarting……… 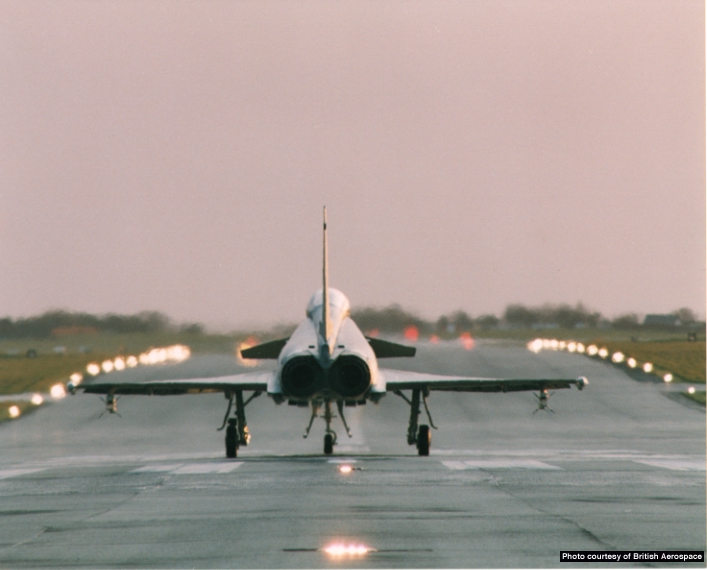 Computer simulations and shoot-em-ups (only for use as relaxation between writing web pages, honest :-)) Well with a 400 MHz Pentium II up my sleeve (damn, that’s starting to sound underpowered these days – time to upgrade!) I can partake of the odd distraction or two. Most of these should be listed on the webbery page since they are, after all, integral parts of the web design process 🙂 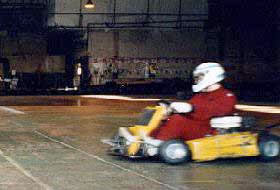 For the last 6 years or so, I’ve raced at a few local kart tracks, though the main one was Spitfire Karting, at Feltham, Middx. I have a few cheap plastic trophies so I must be doing something right. Great fun, whizzing around the circuit only a few inches off the ground, screeching round the corners. Unfortunately, Spitfire Karting was demolished a while ago so I’m looking for somewhere else to burn rubber.

I started juggling about 10 years ago. I met someone at a training course who brought along some of his juggling props for people to try (thanks Alan!). I gave it a try using tennis balls – bad idea, as when you drop them (as you inevitably will, as a beginner), they roll and bounce everywhere. Nevertheless I managed to just about juggle 3 balls, so I decided to upgrade to some proper ‘thuds’ (so-called because that’s the sound they make when they fall on the ground). Since then I have progressed to clubs and flaming torches! Still stuck at three torches/clubs and four balls though. Now if only I can master 5 ball cascades…..

Yes, that’s right, croquet. An amazing sport. I remember my first game and the first thing I learnt about croquet – “The aim of cricket is to play the game, the aim of croquet is to win!” It can be a vicious game, not in a physical sense, but tactically: the main goals for a player’s turn are to score points for themself and mess up the opponent’s position. In other words, it my have taken you a couple of turns to position yourself ready to score a point, only to find your balls smashed to the corners of the court by your opponent! So naturally you do the same to them……!